See here for him and his alter egos. 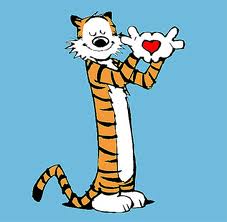 Live and don't learn, that's us.

Calvin's stuffed tiger doll... Or maybe his Not-So-Imaginary Friend. Watterson said that the question didn't concern him. Named after Thomas Hobbes, he's usually seen through Calvin's eyes as an actual tiger while everyone else sees a doll. He's a proud tiger nonetheless and ultimately Calvin's best friend.

I'd ask you to play House, but you'd be a weird example for our kids.

The neighbor girl and one of the few people Calvin actually interacts with his age. She's a constant target of Calvin's pranks but seems to handle her own quite well.

I haven't seen Calvin for about 15 minutes now. That probably means he's getting in trouble.

Calvin's mom. She acts as the disciplinarian of her household.

It's going to be a grim day when the world is run by a generation that doesn't know anything but what it's seen on TV.

Calvin's dad. A patent attorney with a dim view of the modern world and a focus on building character through miserable experiences. 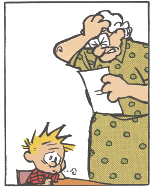 It's not enough that we have to be disciplinarians. Now we need to be psychologists.

Calvin's first-grade teacher. Miss Wormwood struggles mightily to be patient with Calvin and yearns for retirement. Watterson named her, somewhat obscurely, after the low-ranking demon The Screwtape Letters are being sent to. 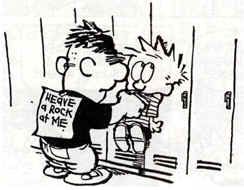 Hey Twinky, want to see if there's an afterlife?

The class bully who got held back in school multiple times and often takes Calvin's money. He's the only kid Calvin knows that shaves.

For eight bucks a night, I don't put up with much.

Calvin's babysitter. She's often the only one in the neighborhood willing to babysit Calvin for his parents, provided she gets paid extra of course.

Monsters Under the Bed 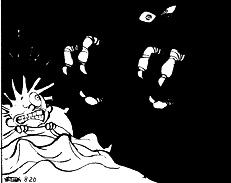 The various monsters that live under Calvin's bed.
Advertisement:

The principal of Calvin's school. Calvin is a frequent guest in his office.
Calvin's Classmates 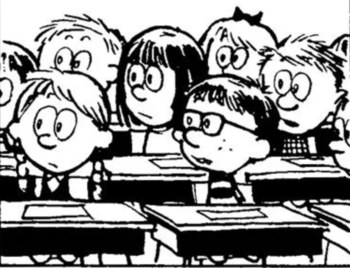 The other children that go to Calvin's school.
The Duplicates 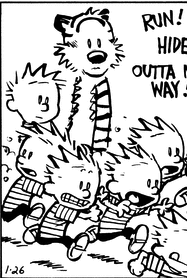 Several clones Calvin made of himself with his new Duplicator invention.

Hobbes: The ethicator must've done some deep digging to unearth him!

A duplicate Calvin made of himself, who only has Calvin's good qualities and none of his bad ones. 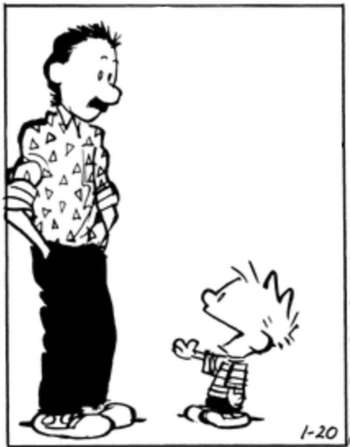 Calvin's uncle on his father's side, who lives far enough away that he hardly ever sees Calvin and his family.
Snow Goons 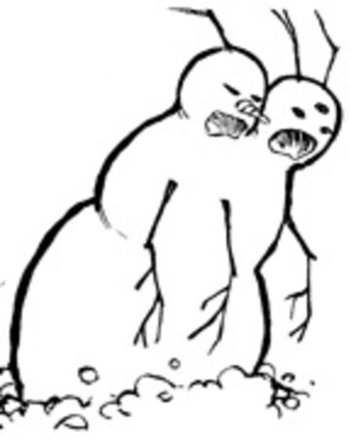 A mob of living evil, mutant snowmen. Calvin creates one who, proceeds to attack him and make more like itself.
Calvin's Doctor 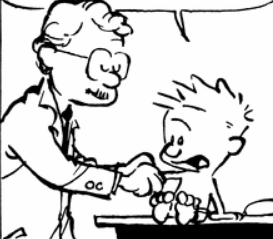 A pediatrician whom Calvin visits for check-ups.

A couple of aliens who think they bought the world from Calvin.

Calvin's bicycle. Most attempts by him to ride it end up with it trying to kill him.