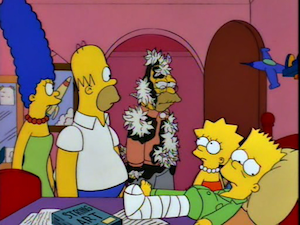 "Gonna be in the tub for a while."
The Simpsons, being a Long Runner, has been a rich source of noodle incidents since 1989—oftentimes without even trying.

As a series that thrives on Rule of Funny while reveling in its Negative Continuity, that really can't be helped. Happily, the show's extensive experience with the trope, along with its masterful use of Rapid-Fire Comedy and breathless non sequiturs, has elevated the comic Noodle Incident to an art form; many are among the funniest, most quotable, and most remembered jokes in given episodes.

Go Back to the main page here, or find examples from other western animation here.