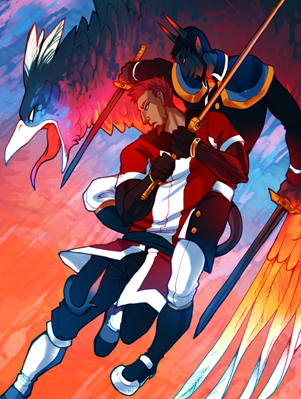 Man plus a couple of monsters.
"Silas seems very human, and it's unusual. WELCOME, but unusual."
—Captain "Lex" Lexington

Men+Monsters is an Yaoi Genre webcomic by Aero Zero (the creator of Kyria). It is set in a high fantasy world and stars three characters; the human Lex, a Captain in the Queen's army; his stodgy automaton companion, Akilas; and the beastman Silas. The comic starts when Lex and Akilas find Silas, with whom Lex is immediately smitten (much to Akilas' chagrin). They continue on adventures together, even though Lex risks execution from the Queen due to his forbidden relationship with Silas.

You can read the whole thing (which is NSFW, being an Yaoi Genre comic and all) Here.