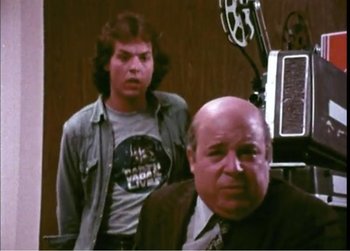 A Different Approach is a 1978 short film (21 minutes) directed by Fern Field.

A bunch of corporate types gather together to watch a film they are producing, a public-service short film funded by the government, encouraging businesses to hire the physically disabled (or, as they're called in 1970s lingo, the "handicapped"). A brash young filmmaker named Howard (Michael Keaton) starts the projector and plays the first scene—a musical number in which a bunch of people in wheelchairs sing about how all they want is a chance to work.

The leader of the meeting (Sorrell Booke, Boss Hogg from The Dukes of Hazzard), who expected a typical sort of serious, earnest public-service film, is appalled, but Howard insists that making the product entertaining will also make it more effective. Various sketch comedy bits play out, introduced by Real Life television stars of the day, all dedicated to the message that the physically disabled are an untapped source of labor who can do all sorts of jobs if only they are given the chance.