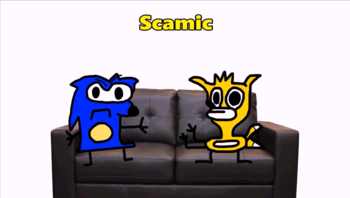 Scamicnote Originally known as Scamic and Mails is uh.. erm.. a bizarre Stylistic Suck version of Sonic the Hedgehog created by user MetHurdlenote Formerly known as Circular Conundrum. The show features surreal takes on all the Sonic characters with butchered names. Despite it's title, the series doesn't follow Scamic, but instead focuses on Mails, the Only Sane Man forced to protect the Jewels of Not Goodness from the evil clutches of Eggnog. It can be best described as Dada meets Sonic the Hedgehog.

After the first three episodes, the show entirely ditches it's original premise. Nowadays the show is about Mails (forcibly) going on insanely absurd adventures that often end with no resolution, something exploding, and someone, or more likely, everyone, dying. The adventures range from menial problems like getting stuck on the couch, having a nightmare, or getting a new phone to infiltrating furry conventions, fighting an army of skeletons, or getting lost in an endless dimension of hallways.

After fifty episodes, the show seemingly concluded with "Future", a Distant Finale-type episode where we see all the characters in the future. However a month later new episodes began to mysteriously release. Something is off according to the descriptions but nothing yet has been fuly revealed.

Requiem for a Jewel