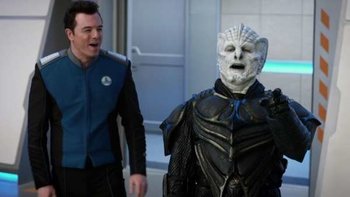 Only Ed would be weird enough to trust Gordon with Shapeshifter abilities.
Mercer and Malloy go on an undercover mission to obtain a copy of the Krill scriptures, the Anhkana, in order to understand them better, but they discover the Krill ship they've infiltrated is on its own mission: using a weapon that will kill a hundred thousand humans on a nearby colony. And the Krill have their own children aboard the ship.