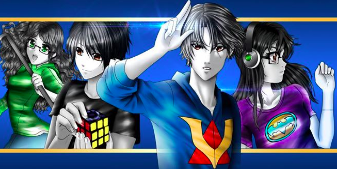 Venturian Tale is a Let's Play Channel starring the Frye siblings: Venturian (Jordan), Homeless Goomba (Isaac), Immortal Kyodai (Cierra) and Bethany Frye. Together they play a number of games, usually showing off interesting or unusual Mods for the game, and almost always getting sidetracked with their own hijinks.

Of particular note is that the siblings often slip into different character personas for fun, creating a recurring cast of characters and a (very) vague story and continuity.

They primarily play Garry's Mod, but dabble in many others, including Let's Plays of The Elder Scrolls V: Skyrim, Fallout 3, Fallout: New Vegas, Minecraft, Roblox, Dark Souls 2, Portal, and Super Mario 64. They also occasionally do their own scripted stories, including the original series Qeios.

On June 29, 2021, the channel went onto an indefinite hiatus after a video from Bethany was released explaining why she and Cierra had disappeared from the videos.