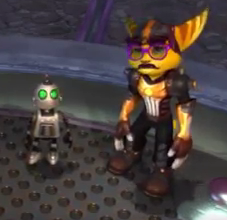 "Aw, calm down Ratchet, and drink your tea!"
Advertisement:

Thanks to over-the-top characters and an increasingly stranger arsenal, our favorite Lombax and robot (along with their assortment of allies and foes) sure have a lot of yuks to give. Fair warning: you might be here for a little while.