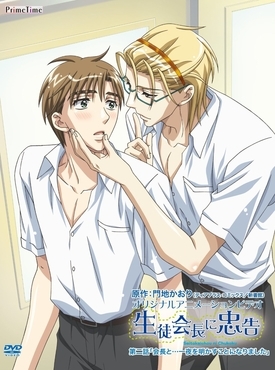 Written by Kaori Monchi, Seitokaichou ni Chuukoku is a Boys' Love series known in English-speaking countries as "Hey! Class President". It's a fairly standard "campus school romance between green-eyed Kokusai, the slight absent minded Student Council President, and the blonde Chiga, an underclassman who practises at the same dojo. The series includes both manga and two OVA's.