Film / A Report on the Party and the Guests 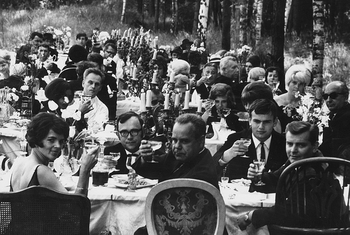 A Report on the Party and the Guests (O slavnosti a hostech, literally "about the festival and guests") is a 1966 film from the former Czechoslovakia, in Czech, directed by Jan Nemec.

It is a thinly veiled allegorical satire about communism in Czechoslovakia. Seven middle-aged bourgeois folks, four men and three women, are having a picnic in a forest glade. They are enjoying themselves and talking idly. They see a noisy wedding procession pass by. Suddenly a group of intimidating Mooks, led by a smiling but distinctively creepy fellow named Rudolf, usher the picnicking friends into a clearing. They produce a desk and chair out of nowhere, and Rudolf sits them down and starts questioning the picnickers...

Banned in Czechoslovakia by the Communist authorities. Later shown in that country during the "Prague Spring" of political freedom in 1968, then re-banned after Russian tanks restored authoritarianism, and not shown again there until after the Velvet Revolution that ended Communism in 1989.