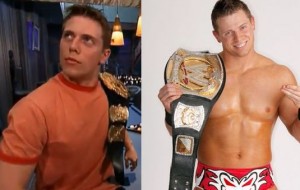 From delusional WWE fanboy to delusional WWE Champion.
"My entire career has been a secret plan to get this job. I applied before but I got knocked back because the BBC wanted someone else. Also, I was seven."
— Steven Moffat, upon being named lead writer/producer for Doctor Who
Advertisement:

Some fans have all the luck. Somehow they've managed to be a part of the very industry, or even the very work, that they're a fan of. This can range anywhere from the minor, such as a Contest Winner Cameo, or to the point where the fan has creative control and is Running the Asylum.

It should be noted that, especially in the case of large media franchises, this is often a form of scab labor. Management is always going to prefer someone who is genuinely devoted to the work rather than more well-rounded working professionals who see it as nothing more than a job and expect proper compensation.

As noted below, many franchises have been around for so long that it's only natural that fans would get to work on them.

Star Wars
Doctor Who
Since Doctor Who has been running since 1963 (hiatus not withstanding), there's an entire generation of people who loved the show enough to work their way into the industry and onto the staff. Some of the more recent fans were born after the show had started running. Though some of them also ended up Running the Asylum.
Advertisement:
Lord of the Rings
Transformers
Kamen Rider