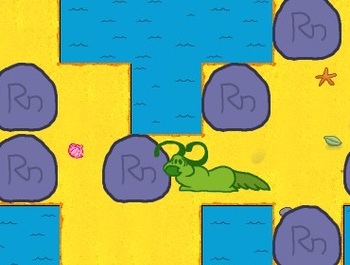 This grub is doomed.
Advertisement:

86 is a peculiar little indie video game that was released exclusively to Steam on September 3rd 2020. It features a creature called Sluggle, who must discover and solve a specific set of puzzles in order to, well, not die after 86 seconds. Fortunately, Death Is a Slap on the Wrist when you get to keep your memories and can try over and over. The game's objective is to actually explore the world 86 seconds at a time and figure out the rules behind the game's many obscure puzzles. Once confident that you've mastered how everything works, you can go for a run and try to reach the game's end within the strict time limit.