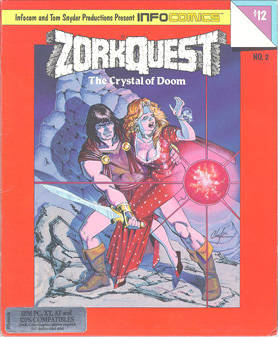 ZorkQuest: The Crystal of Doom is a game for the Commodore 64 and PC Booter and was released in 1989. It was published by Infocom, Inc. and developed by Tom Snyder Productions, Inc.
Advertisement:

The caravan of the brave adventurers heads towards Accardi-By-The-Sea, each of them motivated in his (or her) own way. The magician Frobwit is on his way to the Convention of Enchanters and Sorcerers; the lovely Acia is travelling to visit her sickly grandmother; the merchant Gurthark simply wants to sell goods; and the scout Ryker ponders the new feeling that has entered his life: love....

ZorkQuest: The Crystal of Doom is a direct sequel to ZorkQuest: Assault on Egreth Castle. The gameplay system is identical to that of its predecessor, retaining the player's ability to either follow the narrative from a single character's point of view, or "jump" to a new character. Thus, the player is able to re-read the story and learn new things about how the characters' different paths affected each other, as well as the outcome of the entire story.

Like in the other InfoComics, the display technology uses a 3D vector format; many scenes are scaled (like zooming on a camera lens), sacrificing detailed graphic textures colors.