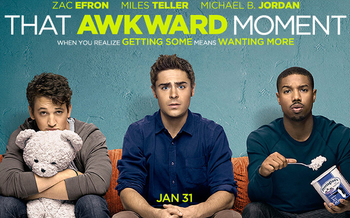 That Awkward Moment (known as Are We Officially Dating? in New Zealand) is a 2014 Rom Com, the directorial debut of Tom Gormican (who also wrote the film), and starring Zac Efron, Miles Teller, Michael B. Jordan, Imogen Poots, Mackenzie Davis, and Jessica Lucas.

The story focuses on Jason (Efron), Daniel (Teller), and Mikey (Jordan), three Heterosexual Life-Partners who live in New York City. Jason and Daniel, both of whom design book covers for a publishing company, enjoy being single and engaging in casual encounters with women, while Mikey, a hospital nurse, is happily married to Vera (Lucas)—that is, until he finds out Vera's been having an affair and now wants a divorce.

In a show of brotherly solidarity, Jason and Daniel make a pact to remain single along with Mikey. Soon, though, Jason meets Ellie (Poots), an attractive writer, and begins a relationship with her; Daniel's relationship with his friend Chelsea (Davis) evolves into something else, and Mikey struggles to work through his issues with Vera.