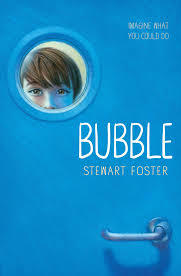 Imagine what you could do.
Advertisement:

Bubble is a Children's Book by Stewart Foster.

Joe is an 11-year-old kid who's spent the bulk of his life in a single room in a London hospital. This is because Joe has an illness that has severely weakened his immune system, and stepping outside it for even a moment means he could catch a disease that WILL kill him. As a result, he's spent his life knowing only the view of the building tops across the street from his hospital room.

One day, a new male nurse known as Amir comes into Joe's life, and the two form a close kinship. As time goes on and Amir continues working with Joe, Amir proposes to Joe an opportunity to know what it's like to go outside.