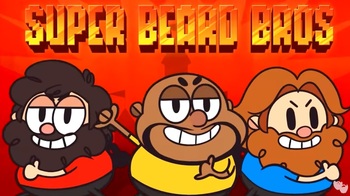 is a part of the That One Video Gamer community.

Super Beard Bros initially started out solely as a spin-off series from The Completionist, but has since, after overcoming several hurdles, grown to become its own independent show on That One Video Gamer.

The show started in November of 2012, as "a journalistic approach to Let's Plays", and featured Jirard Khalil and Alex Faciane from The Completionist. Greg Wilmot eventually joined the team and the show was renamed "Super Beard Bros. DELUXE". However, the show was cancelled in 2013 after ten different series*  Sonic 3 & Knuckles, Wild ARMs, Star Fox 64, Super Mario Land 2: 6 Golden Coins, Super Mario RPG, Super Metroid, Mega Man X, Castlevania: Symphony of the Night, Donkey Kong Country and Tiny Brains, and finished up its run in 2014 after completing the games they were currently on and doing a Completionist episode on each one.

Brett Bayonne, a producer of The Completionist and former co-host of Super Couch Fighters and Weekend Warriors, joined the Bros. in 2019, in order to lessen the burden Jirard and Alex had. The schedule was revamped once again, with three alternate series going on Monday-Friday and one going on weekends. Two of the weekday series are general playthroughs, but the third is "Super Beard Bowl," where the Community decides on two of four topics, with the Patreon deciding on the final topic, which is then covered over 8 episodes each month. Weekends are dedicated to "'Eff it, Beard Bros.!," a series paid for by Patreon members where all three play a specific game chosen by the paying fan.

Due to his growing responsibilities to his own channel and G4TV, Jirard only makes appearances on "'Eff it," with Alex and Brett doing the majority of the standard videos, including "Super Beard Bowl."