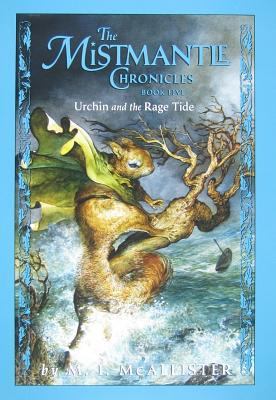 The Mistmantle Chronicles is a series in the same vein of animal fantasy as Redwall, Guardians of Ga'Hoole, and the like. It focuses around Urchin, an oddly colored squirrel who is washed up on the beach of the titular Island inhabited by moles, otters, squirrels and hedgehogs on a night of falling ("Riding" in the book's universe) stars. Most of the books take place on the generally isolated island, since "those who truely belong on Mistmantle cannot leave by water and return by water" (except for Voyagers), and deal with a lot of internal strife, especially inside Mistmantle Tower. Keeps most of the animals acting like they should, meaning while hedgehogs may eat cakes and drink wine, they also enjoy bugs. Written by M. I. McAllister.