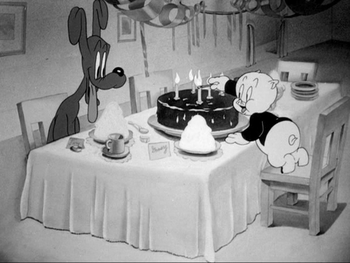 When Porky's birthday arrives, he plans a big party for the occasion. At the same time, he receives a talented little silkworm that makes garments whenever it hears the word 'sew', unfortunately, the majority of its work tends to be ladies' undergarments. Porky's invited friends consist of Penguin, who greedily gobbles down cake and ice cream, and the wacky and silly Goosey. When the silkworm's sewing gets out of hand, Porky tries to dispose of it, only to end up inside Penguin and giving him a top-hat shaped head. As all this is going on, Porky's dog Black Fury ends up getting intoxicated on hair tonic, with his fur growing shaggy, prompting him to shave. However, after putting on shaving cream and being spooked by the electric razor, Black Fury ends up being mistaken by Porky and his guests for a mad dog, leading to a chase around the house.