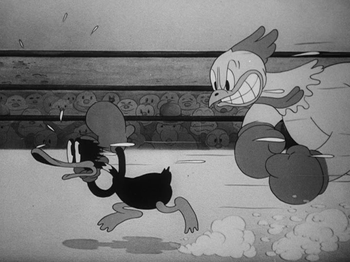 "I'm so crazy, I don't know this is impossible!"
—Daffy Duck, while riding an invisible bicycle in mid-air
Advertisement:

Porky & Daffy is a 1938 Looney Tunes cartoon, directed by Bob Clampett and starring Porky Pig and Daffy Duck. It is also the first cartoon to team up the two characters (not counting Daffy's bit-role in Porky's Duck Hunt).

Porky and Daffy are sharing a house together one day when Porky finds out about a champion chicken boxer challenging anyone to fight him that night. Porky awakens Daffy upstairs, who is more than eager to take part in the fight, with Porky staying by his side as manager.