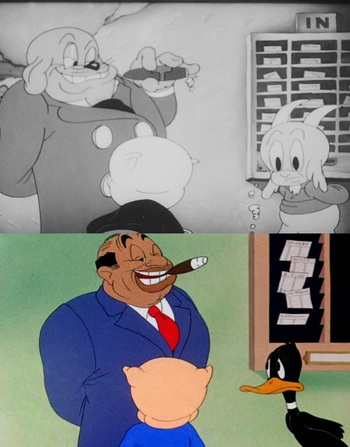 "Well, well, if it isn't the Dover Boys, and only two hours late, too..."
Advertisement:

Porky's Badtime Story is a 1937 Looney Tunes cartoon, and generally considered to be the official directorial debut of Bob Clampett.note However, it was not the first cartoon or even the first film he directed period. His first film was a 1927 live action piece he directed called "The Golf Widow". The opening cartoon segment of the 1937 live action film When's Your Birthday? is sometimes attributed as his debut, while others point to Porky and Gabby as his directorial debut since its now believed he and Chuck Jones ghost-directed it, even though Ub Iwerks received supervisor credit.

The cartoon starts with Porky and Gabby realizing they overslept and rush off to work at Peter Piper Pickled Peppers, sneaking in and trying and failing to clocking in without getting notice. Their boss catches them and threatens to fire them if they're late again, ordering them to get to work.

Later that night, Porky and Gabby try to go to sleep early, but are interrupted by a bunch of cats next door along with a bug. Later that night, the moon comes out and its light wakes up Porky—one of Porky's attempts to close the window ends up wrecking his bed. As the night progresses, a thunderstorm occurs while Porky is sleeping in Gabby's bed. A leak in the roof disturbs Gabby, who then opens an umbrella in the house with Porky telling him that it's bad luck. Gabby ignores Porky until lightning destroys the umbrella. When Gabby remarks that he should try sleeping under Niagara Falls, the roof caves in and floods the room.

The next morning, Porky and Gabby are shown sleeping in the drawers when the alarm clock goes off. They rush off to work, but when they arrive at the building, they find out it's Sunday and thus is closed. Porky and Gabby drive back to get some sleep, the alarm clock goes off again, which prompts Porky to whack it with a mallet as the cartoon irises out.

The short was later remade in color as Tick Tock Tuckered in 1944, which has many of the same basic plot and story beats, but replaces Gabby Goat with Daffy Duck, changes several scenes, and completely overhauls the animation.