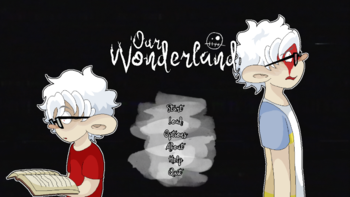 "What do you want, Iggy? What do you wish for more than anything else in the whole world?"
Advertisement:

Our Wonderland is an episodic Visual Novel horror game by Carrot Patch Games, of Easter fame. The first episode released in 2021, and the work currently consists of four "Arcs" with more planned to come.

Eleven-year-old Iggy wasn’t sure what he was expecting when he dragged his friends out to the woods to attempt a strange ritual from a book he found in the dumpster at school, but his wildest imagination couldn’t have prepared him for the land of wonder and magic that awaited them at the bottom of that old willow tree.

Now, however, it’s twenty years later, and he and his friends are past the age of make-believe. The wonderland of their youth has become nothing more than a far-off dream, until one night, Bucks and her newborn daughter disappear without a trace. Soon, Iggy and his friends find themselves being pulled back into that world of childish glee—only their wishes and desires aren’t so innocent anymore, and the world has twisted itself into a land of corruption, evil, and lust that’s scarcely recognizable.

The original visual novel can be downloaded here

. A spin-off called Our Fantastic Wonderland, featuring the cast in a D&D-style fantasy story, was released in 2022 and can be downloaded here

Our Wonderland contains examples of: