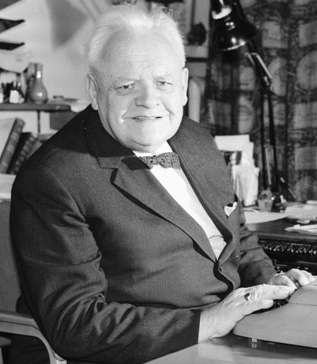 Melchior Wańkowicz (1892-1974) - a reporter, traveller, war correspondent, fighter for independence and all around cool guy. Seriously, if there wasn't ample evidence that he lived you'd be well justified in thinking he was a novel character.
Advertisement:

Born and raised in the Russian-occupied part of Poland, he started both conspiring and writing in Boarding School (under Nom De Plume Jerzy Łużyc). Studied law in Kraków, where he met his future wife. Went on to fight for Poland.

This done, he settled in Warsaw as a journalist, writer, publisher and (as of 1919) father, leaving every once in a while to write about far-away places. Or not so far away - Na tropach Smętka translation "Following Smętek" - Smętek was a sort of Mazurian hobgoblin described lands just behind the border but unavailable due to Prussian bureaucracy.

When World War II came, he got drafted, but missed his division and finally landed in Romania, where he made interviews with all the interesting people, before he was evacuated by the British Army. Afterwards he joined general Anders as the war correspondent.

After the war he lived in London, then in the USA, finally returning to Poland, or at least to the Polish lands, in 1958. Being staunchingly anti-establishment (anti-censorship, specifically) he stood before a Kangaroo Court, but the communists chickened out and left him alone in the end, since he became a bit of an Icon of Rebellion.

Having traveled half the world, endured three major wars and one-upped the government, Melchior Wańkowicz died of cancer in 1974.

His best known works are:

Tropes that apply to Melchior Wańkowicz: