The characters of the manga/anime series Nichijou. Names are in western order. 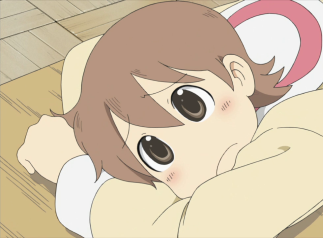 Things never seem to go right for her...
Voiced by: Mariko Honda (Japanese), Morgan Garrett (English)
"I should be glad nothing perishable landed on me!"

One of the five "main" characters of the series, "Yukko" is an ordinary student with a propensity for forgetting her homework. She is also locked in a perpetual "Boke and Tsukkomi" gag with Mai. 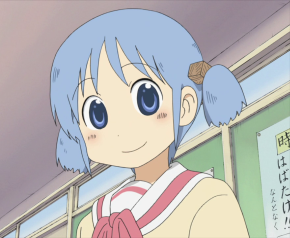 Don't ask how the hair decs stay there. No one knows the answer to that one.
Voiced by: Mai Aizawa (Japanese), Leah Clark (English)
"If she sees that drawing, she'll never think of me the same way again!"

Another of the five "main" characters, Mio is the most normal of the cast, but that isn't saying much. She usually plays the straight man to Yukko's antics. 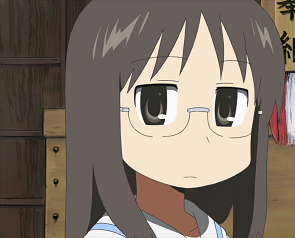 Don't take what she says at face value.
Voiced by: Misuzu Togashi (Japanese), Brittany Lauda (English)
"I was joking."

Rounding off the protagonist trio with Yukko and Mio is Mai, a quiet, bespectacled girl with a fondness for screwing with people just to see how they'll respond. Makes up the "Boke" side of her relationship with Yukko. Also has a thing for whittling Buddha statues. 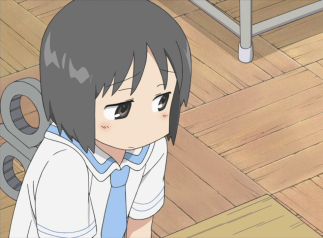 Sure, it's weird she's a robot, but look at everyone else.
Voiced by: Shizuka Furuya (Japanese), Monica Rial (English)

A Ridiculously Human Robot who wishes she were a real girl more than anything, even if it means things like being able to get dental cavities. She struggles to keep the fact that she's a robot a secret. A struggle not at all helped by the obvious wind-up key in her back which her creator absolutely refuses to remove. 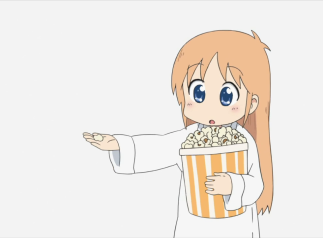 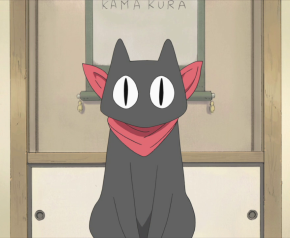 "No matter how you look at it, that was too much petting."
Voiced by: Minoru Shiraishi (Japanese), Anthony Bowling (with collar), Macy Johnson (without collar) (English) 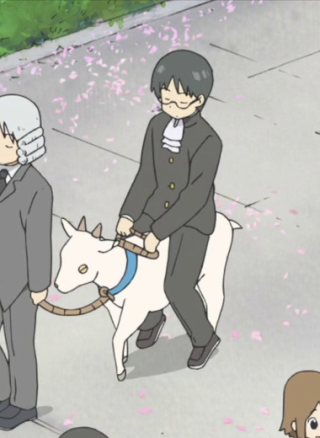 A spacy student who wears an ascot at all times and rides a goat to school. He puts on pretensions of being the eldest son of a wealthy family. However, it's quickly revealed he's the eldest son of a family of farmers (hence the goat). He tends to irritate his classmate Misato Tachibana with his oblivious nature, causing her to frequently shoot at him. Don't worry, he can take it. 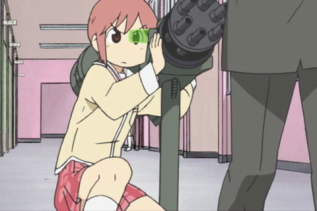 The lengths she'll go to in order to deny her love for Kouji—*boom*
Voiced by: Chika Horikawa (Japanese), Madeleine Morris (English)

A high school girl who frequently finds herself angered by the oblivious carefree actions of Sasahara. She expresses her frustration by unleashing an escalating arsenal of weapons ranging from revolvers to missile launchers. There are subtle hints that these outbursts may be the result of feelings for Sasahara on Misato's part. 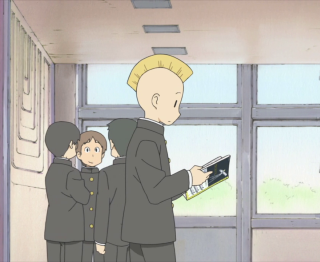 A boy whose most prominent feature is a naturally growing mohawk. When not at school, he is a skeptic and seeks to debunk supernatural phenomena. Despite his mohawk making him look like a delinquent, he actually is a fairly nice guy. 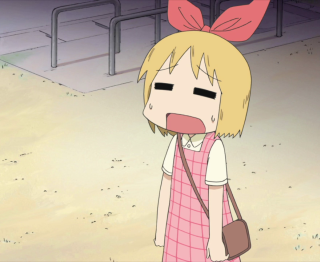 A girl noted for her very large red ribbon that she wears in her hair. She's fond of trying out new places that she reads about, but tends to find the experiences more confusing than enlightening.

Son of the C.E.O. of the Daiku Corporation, which runs chains of restaurants and cafes among other things. Created the "Go-Soccer" Club on a whim and has since come to regret it since encountering people actually familiar with the game. 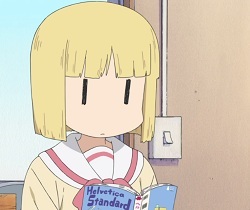 For a while she was the only member of the Go-Soccer Club alongside Daiku. However, she shows little interest in anything beyond reading the latest volumes of Helvetica Standard.

The younger brother of teacher Izumi Sakurai. He was surprised to learn his school had a Go-Soccer club and eagerly joined. To Daiku's shock, however, Makoto takes his Go-Soccer ''very'' seriously. 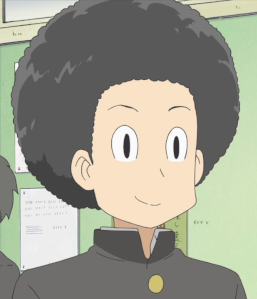 A student with an afro. Best friends with Nakanojou. 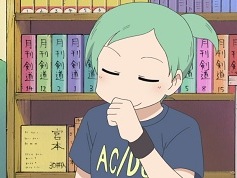 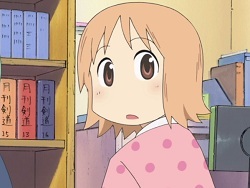 One of Misato's best friends. A bit of a ditz.

Misato's younger sister. She's in middle school and is a member of the kendo club. Her response to the absurdities that surround her is barely contained laughter. She's fully aware of Misato's feelings for Sasahara.

A member of the Go-Soccer club, and one of the few people who are actually familiar with the rules of the game. 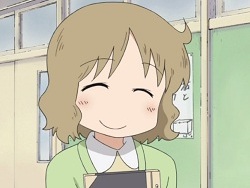 A timid teacher who became a guidance counselor as much to improve herself as her students. She tends to get flustered very easily, and has a hard time actually disciplining students. The elder sister of Makoto Sakurai. 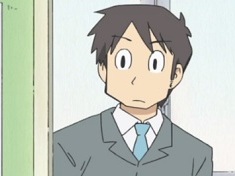 A teacher at the high school. Frequently on Yuuko's case regarding her inability to do her homework. He harbors a crush on Izumi Sakurai. His imagination tends to run wild when he's speaking to her. He's also sponsor for the Go-Soccer Club, blackmailed by Makoto. 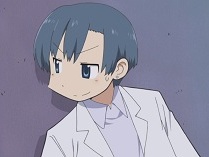 A science teacher who managed to figure out that Nano's a robot. Confused about why Nano would be enrolled in school instead of announced to the world, she has made it a point to capture Nano and study her. Her schemes always end up backfiring. 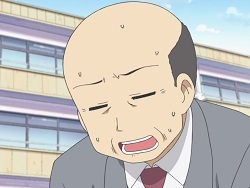 The school principal who often tells old jokes that no one gets. He has also suplexed a deer. 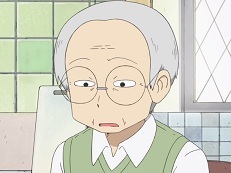 The Vice Principal of the high school. His sad life is brightened by visits from his little grandson Micchan... until Micchan does something that leaves him sadder than before. Seems to dislike the Principal. 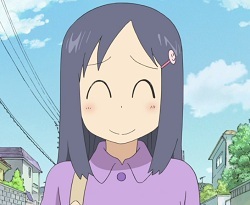 Mio's elder sister. An immature young woman fond of playing pranks on people she comes across, especially her sister. She attends college and is skilled at kendo.

A girl who works at the Daiku Cafe. She's very timid and has a hard time explaining things when her customers are angry or flustered.

Runs a daifuku stall on the streets of town. He takes selling Daifuku very seriously, and insists on model behavior from the people he hires to be his daifuku mascots. Like his son, he has a natural mohawk. Though his has grown long enough that he can fake a normal hairstyle with it.

A random crow that the Professor brings home. She puts Sakamoto's scarf on it so it can speak.

A robot made by the Professor. He runs on biscuits. An improvement over Biscuit #1, whose head flew off.

A dog who has sometimes appeared before Yuuko to offer a comforting paw when things are especially rough on the girl. Is sometimes accompanied by a puppy, Kobuddy.

Izumi and Makoto's dad. He's a respected writer, but very sleepy all the time. His editor attributes this to Hajime losing his wife at a younger age, and thus having to deal with writing and housework at the same time. As he first appeared in chapter 142, he doesn't get to make an appearance in the anime.

A morose girl who has an uncanny resemblance to Yuuko except for her visibly depressed-looking face. Yuuko is mistaken for her before Mio encounters her in person.

The Fey Kingdom
A king, princess, and their soldiers who fly high above the world in a zeppelin. Their adventures are really just elaborate dreams on Yuuko's part. Or are they?

Ruler of the Fey Kingdom. He decided to take a trip around the world on a zeppelin, providing Dolph the chance he needed to grab power. He carries one of the two wood cubes which can be used to resurrect an ancient weapon. 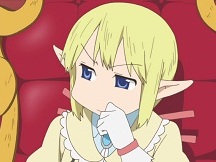 Princess of the Fey Kingdom. She holds the second wood cube needed to resurrect an ancient weapon. She manages to keep it hidden from Dolph until his rebellion fails. She holds the Mooks' turning on her and her father against them.

An officer in the Fey Kingdom's army, adopted and raised by King Albert. Despite his grand plans, his attempt at rebellion ultimately fails due to his own clumsiness. 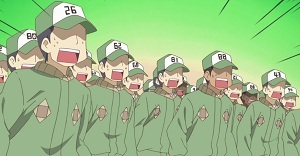 The men who serve the king and princess on the Fey Kingdom Zeppelin. They wear identical uniforms of slacks with green jackets and caps, and are distinguished by the numbers on their hats. Number Eight is usually the centerpiece in skits featuring the zeppelin.

A manga often seen being read by characters, as well as an actual manga by Keiichi Arawi. Some episodes have Helvetica Standard segments of their own.

With the exception of Pino, none of these names are "official", merely descriptive. Character entries are reserved for characters who have appeared in more than one Helvetica Standard sketch.

A Shinigami who doesn't understand how to read the atmosphere of a situation. Once had his scythe stolen by the Poverty-Stricken Tengu.

An angel. Tries to help others when she can and owns a very powerful toaster.

A kind landlady who isn't so kind to tenants who are behind on rent.

A Tengu who has sometimes resorted to theft to get enough money to eat.