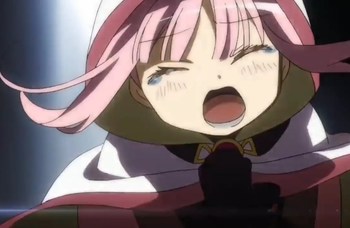 No shortage of meguca tears
While most of the story is Lighter and Softer compared to other entries in the series, there are instances that remind us that, yes, this is still the universe where girls sell their souls for a wish and risk themselves turning into monsters.
Advertisement:

Side Stories and Events

However this didn't solve anything, only gave her an ability to change her physical appearance.