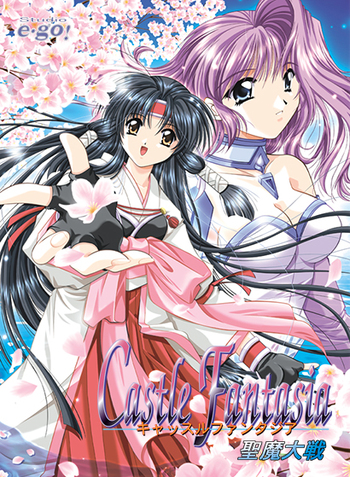 Castle Fantasia 2 Renewal (Castle Fantasia 2: Seima Taisen (Sacred War) Renewal) is a strategy game/H-Game fusion released by Studio e. Go on December 22, 2000, as an Updated Re-release to the original Castle Fantasia 2. It was given a Fan Translation by BTAxis.

The original version had its sprites redrawn in high res, all characters were given full voice overs, and the music was resampled to CD audio quality.

That said, the story is as follows: You are Hewie, a general in the Injellan army, and your country is run by a theocratic regime that has declared war on the nation of Rusheria, and though Hewie follows his orders (mostly) loyally, he begins to question not only the purpose of the war, but whether it's actually true the enemy is, as his superiors keep saying, Always Chaotic Evil.

It's a fairly hard Tactical RPG, but it also is an Eroge, which means that if you play your cards right, you can wind up in a romantic relationship with one of the women in the game, though it's far more concentrated on the strategy gameplay and character development by far.

Tropes common to the game are: