Film / I Can Do Bad All By Myself

I Can Do Bad All by Myself is musical romantic dramedy released in 2009 by Tyler Perry. 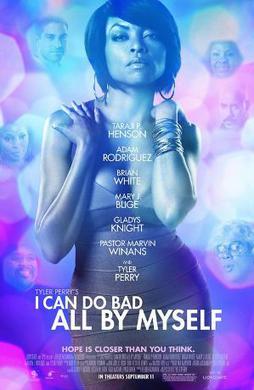 The movie starts with April, an alcoholic bar singer, doing her routine at a nightclub. Meanwhile, in another part of town, Madea and her brother, Joe, catch three kids (named Jennifer, Manny, and Byron) breaking into their house. After she hears their side of the story, Madea feeds and decides to help them, especially after Manny tells her that they haven't seen their grandma, Rose, in a little under a week and their mom died, so the only family they have is their aunt, April.

Later, Madea drops the kids with April, who isn't so thrilled to have them there. During this, a pastor from the local church asks her to take in a Colombian immigrant, Sandino, to which she unwillingly does.

I Can Do Bad All By Myself provides examples of: