Literature / Came Back to Show You I Could Fly 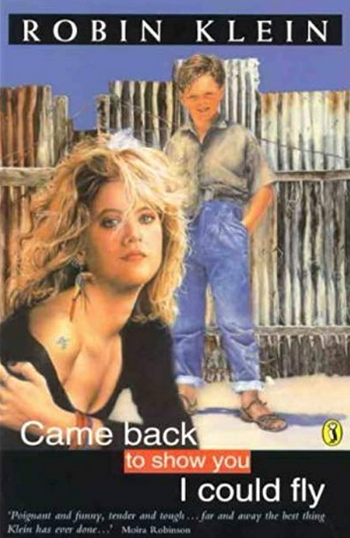 Anyone who wore satin and silver lace and black nail polish, anyone who had a little flying horse tattooed on one shoulder, could reach heights undreamed of by other people.
Advertisement:

Came Back to Show You I Could Fly is a novel by Australian author Robin Klein.

Seymour Kerley was an eleven-year-old loner, stuck with a fussy guardian in an inner-city suburb and forbidden to leave the house over summer holidays. Bored and unhappy, he sneaks out one day, and in his rush to get away from the bullies in the area, stumbles upon Angie: a beautiful, charismatic woman who lives in a shed out the back of one of the other houses in Seymour's guardian's neighbourhood. He is bewitched by her carefree attitude and wild behaviour, and she opens up a whole wide world to him that he'd never experienced before: shopping sprees, sojourns to rich neighbourhoods, gambling.

Angie, however, is not what she seems: it becomes apparent that she is unemployed, has to take medication dispensed from an out-of-the-way clinic for an undisclosed problem, estranged from her wealthy family, very probably a thief, and prone to fits of rage and "flu".

It received a film adaptation in 1993. Due to rights issues involving the eponymous song, the film is Say a Little Prayer instead.