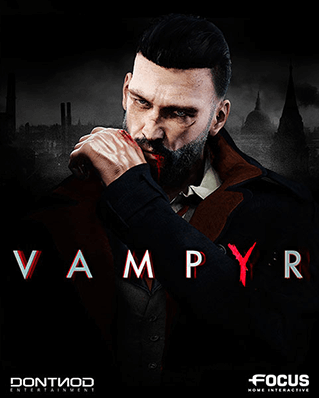 Cursed be the choice.
"Twelve dreams for the red queen under crown of stone. Eight voracious beasts born from eight restless nights. Four nails piercing the flesh of the sinner. One prayer for the summoned called by this song."
— Mysterious Entity, Opening Monologue
Advertisement:

Vampyr is an Action RPG developed by Dontnod Entertainment and published by Focus Home Interactive. It was originally slated to be available for PC, PlayStation 4 and Xbox One in late 2017, but was delayed until June 5th, 2018. Then came to Nintendo Switch on October 29th, 2019, the Port was handled by a team at Saber Interactive.

The year is 1918. Jonathan E. Reid is a brilliant doctor who served during the Great War and became familiar with a brand new blood transfusion technique that's saved many lives. When the game begins, he's just returned home to London from the front and wakes up after an attack by a mysterious assailant. This attack was the cause of his transformation into a vampire. It seems that his status as a specialist in human blood is of interest to the vampire society that hides in the shadows.

Jonathan's thirst for blood compels him to kill. To do this successfully, the player must gather information about his targets, study and change their habits, collect clues, and maintain certain relationships by communicating with the inhabitants of London. If one so chooses, anyone in the game could be a target, which will have consequences that affect the story. Feeding on human blood will unlock new vampiric powers in addition to providing nourishment. On the other hand, one can also choose not to kill anyone, as they're under no obligation to do so in order to progress within the game. At the same time, Jonathan has his hands rather full in his professional life, as The Spanish Flu epidemic ravages Europe and his skills as a doctor are in high demand.

Has nothing to do with the 1932 horror movie by the same name.