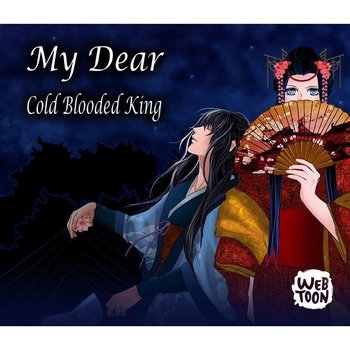 There is a gold palace that sits on high stone walls.
Inside is a tempest that defies and rules all.
With his sword and his army he will conquer everything.
Be afraid, obey... and bow to the Blood King.
Advertisement:

My Dear Cold-Blooded King is a webtoon by Lifelight.

In a land not unlike ancient Japan, the fearsome Blood King Asukai rules. A mysterious figure of legend, it is said that he kills on the slightest pretext, and that he has never been defeated in battle. Yet nobody is even sure what he looks like, for he never descends from his golden palace.

But this is all over the head of Mei Kihara, a young physician doing her best to support her family and help her community. But when she intervenes to prevent the killing of a boy that turns out to be the king's brother, she finds herself summoned to the palace and betrothed to the Blood King, for reasons of political convenience... or is it?

Thus begins Mei's journey into a world of political intrigue, assassination plots, games of deceit, and bishōnen. Loads and loads of bishōnen.