NOTE: This page is for characters in the Toonami universe, not for shows that Toonami has aired. Those go in Toonami's Recap page. 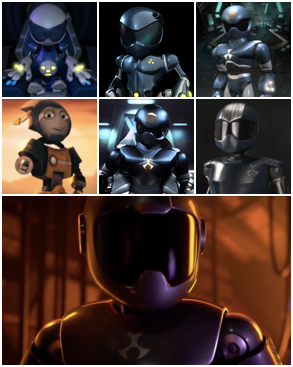 The Host of Cartoon Network's (now [adult swim]'s) action animation block, Toonami. He takes care of the Absolution and the Vindication and keeps it properly running, and is in charge of broadcasting action animation to our little blue planet. Starting out as a pudgy little Bomberman-esque robot, he eventually evolved through several different models (seven, to be exact) to become more human and battle-hardened. 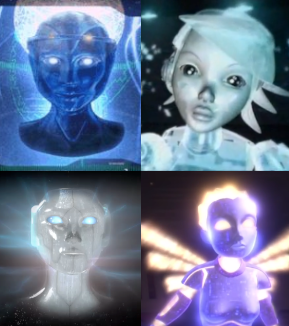 An A.I. matrix who runs the Absolution with TOM. She helps with broadcasting Toonami, and also enjoys playing video games like TOM does. 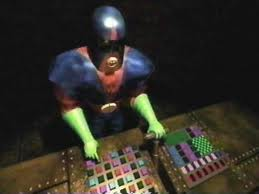 A Space Ghost villain turned former host of Toonami, who ran the block from the comfy confines of his control room in Ghost Planet Industries before TOM came around.

Around since the days when Moltar ran the block, the Clydes are satellite droids that transmit images of action from all over the galaxy back to the Absolution (and before that, Ghost Planet Industries). They are also the 'crew' of the USS Vindication. 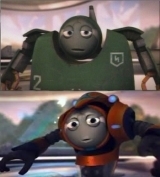 Voiced by: Tom Kenny as D, Dave Wittenberg as Flash

The assistant co-hosts during the TOM 4 era. 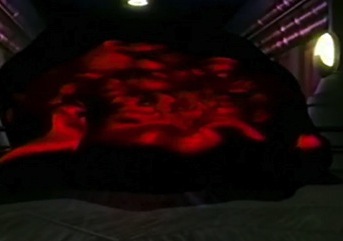 Voiced by: Sonny Strait and Steve Blum (The Intruder II)

A red, alien blob that attempted to invade the Absolution. Being the very first threat that TOM ever faced, it first appeared during Toonami's first T.I.E., The Intruder, and makes a return for The Intruder II. 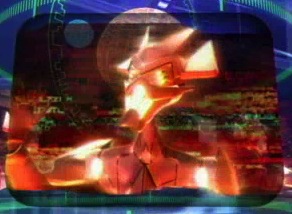 The antagonist of the third T.I.E., Trapped In Hyperspace. He's a virus that attempts to make the Absolution crash into Earth by infecting the ship and taking control, forcing TOM to take action.

The Commander of the Forge (aka "Booger")
Voiced by: Beau Billingslea

The antagonist of the seventh T.I.E., The Forge, he's a brutal warlord who commands The Forge, mass-producing TOM units as slave labor and hoping to use the Vindication to further his plots for galactic conquest.