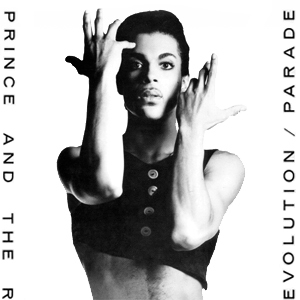 You don't need experience
To turn me out
You just leave it all up to me
I'm gonna show you what it's all about
"Kiss"
Advertisement:

Parade is the eighth studio album recorded by American pop musician Prince, his fourth with The Revolution as his backing band. It was released through Paisley Park Records on March 31, 1986.

This album was assembled to be a soundtrack for Prince's second film project, Under the Cherry Moon. In the film, Prince plays Christopher Tracy, a Roaring Twenties gigolo who swindles high-brow French women. Things get complicated when he falls in love with an heiress.

Prince sought to diversify his musical repertoire further, and also modified his image to match. He also expanded on the neo-psychadelic feel of the previous album, Around the World in a Day.

Critical reception was far more positive, citing this as a creative comeback for His Purple Badness—even if fans would argue he never really fell off. Robert Christgau of The Village Voice characterized the sound as "baroque pop". Retrospectively, AllMusic gives it 4.5 out of 5 stars; Stephen Thomas Erlewine notes that his "weird religious and sexual metaphors" gave the album depth.

Some black audiences were turned off by the decreased funk sound. For his part, rapper Chuck D. didn't understand that judgment, noting that some people "don't want artists to endlessly repeat themselves, yet they can't tolerate change either."

The film, however, was no Purple Rain. It flopped badly, and this may have hurt sales in America, at least. It peaked at #3 on the Billboard 200 album chart, and only reached Platinum in the United States. More notably is the performance globally; Parade went Platinum in the United Kingdom, and was a Top 10 hit in many European markets, as sales outside the U.S. rose above sales within for the first time.

Four singles were released to support the album: "Kiss", "Mountains", "Anotherloverholenyohead", and "Girls & Boys". "Kiss" and "Mountains" were his US hits, with "Kiss" being Prince's third #1 on the Billboard Hot 100. "Girls & Boys", only released in Europe, reached #11 on the UK pop chart.

"But he had grown accustomed to her tropes":