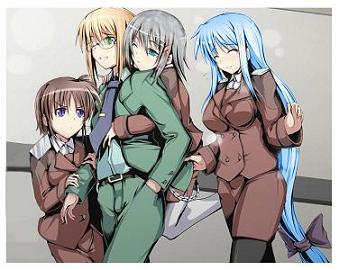 Not your average harem. Honest.

(Also being posted in the AnimeSuki Forum's Nanoha FanFiction Discussion

, though you will need to dig) is a Lyrical Nanoha fanfic by Nanya and Epsilon (aka Yasanagi on AnimeSuki & Epsilon Zeta on Fanfiction.Net).

Taking place six months prior to Magical Record Lyrical Nanoha Force, when an excavation team uncovers lost scriptures from the Book of the Silver Cross, Yuuno gets called away from his civilian life to lend his expertise to the case, but things get really weird really fast when he finds the excavation site blown to smithereens and the Huckebein fighting... the Materials? Yeah baby, it's everyone's favorite Evil Twins from The Battle Of Aces, and things are about to get very very interesting for our dear Ferret Boy...