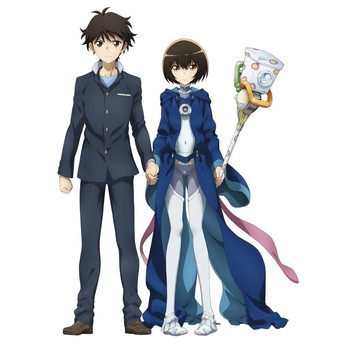 Ichiro Sato and Ryoko Sato (no relation).
Ichiro Sato formerly suffered from eight-grader syndrome, which caused him a lot of grief in his childhood. Now that he attends middle school, he is trying to be normal... until he meets Ryoko Sato, a girl who harbors the same fantasies he previously indulged into. At first, he is willing to let Ryoko be, until his teacher tasks him with looking after her. This experience forces Ichiro to confront a past he previously ran away from and connect with Ryoko in a way he never thought he could.
Advertisement:

Aura: Koga Maryuin's Last War is an anime film produced by AIC ASTA that premiered on April 13, 2013. It is based on the light novel of the same name by Romeo Tanaka.