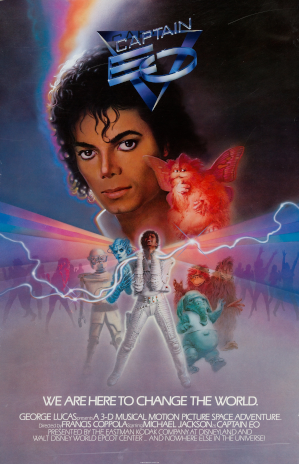 "We are here to change the world..."
Advertisement:

1986 was a good year for The Walt Disney Company if no-one else. New company president Michael Eisner wanted to revitalize the company's flagging animation and theme park divisions, while George Lucas was still riding high on the success of the Star Wars trilogy and Michael Jackson was the biggest star of The '80s period. So three entertainment giants, plus director Francis Ford Coppola, teamed up in order to capitalize on one another's successes, and created the 17-minute 3-D Movie Captain EO for exclusive release at the Disney Theme Parks.

Jackson portrays the eponymous captain, leader of a Ragtag Bunch of Misfits including the robotic security officer Major Domo, robot buddy Minor Domo, hairy two-headed navigator(s) Idee and Odee, elephantine slob Hooter, and Fuzzball, a flying... thing... resembling a cross between a rat, a monkey, and a butterfly. The bumbling crew is just one mistake away from being drummed out of their (unspecified) organization, so for some reason they have been assigned a diplomatic mission of the utmost importance: delivering a goodwill gift to the Supreme Leader (Anjelica Huston, who won an Oscar for Prizzi's Honor not long before this premiered) of a dismal planet. Upon landing, they are captured and dragged before the Borg Queen-esque Supreme Leader, who orders EO imprisoned and tortured for the intrusion. At the last second, he and the crew manage to produce the gift... a song and dance performance that literally changes the world.

The film played at Disneyland and EPCOT Center from 1986 until the mid-Nineties, when it was replaced by Honey, I Shrunk the Audience. The overseas parks took a little longer to get it, but it did successfully run at the Tokyo and Paris complexes. While allegations of child abuse had begun to taint Jackson's reputation by the time it closed in the U.S., it was more advances in theme park technology and the march of time (style-wise) that led it to be put to pasture. However, with the singer's death — and children of The '80s reaching an age to be nostalgic about their childhoods — Captain EO returned to Disneyland (as "Captain EO Tribute"), Tokyo Disneyland, Disneyland Paris, and Epcot as well, making it one of the very few Disney Theme Parks attractions to replace the attraction that replaced it initially. However, it was phased out once again, with the last screening at Epcot taking place on December 6, 2015.

, Captain Eeyore, that's generally one big Funny Moment once it gets to its take on the film's final battle.

By the by... George Lucas collaborating with a notable filmmaker and an internationally-renowned musician on a creature-filled fantasy project... bet he couldn't do that twice in one year, or could he?