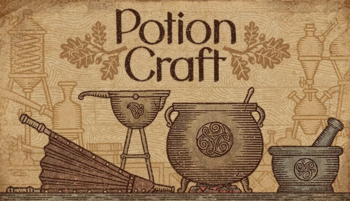 Potion Craft is an alchemy simulator made by niceplay games and published by tinyBuild. You play as an alchemist in a fantasy setting, solving clients' problems with all sorts of magical elixirs; lightning potions to throw on monsters, sleeping potions to treat insomnia, and growth potions to heal blighted fields. Along the way, you can learn new recipes and renovate your apothecary, turning it from an abandoned house to a renowned workshop...perhaps one capable of synthesizing the Philosopher's Stone itself.
Advertisement:

Just be careful who you sell poisons to...