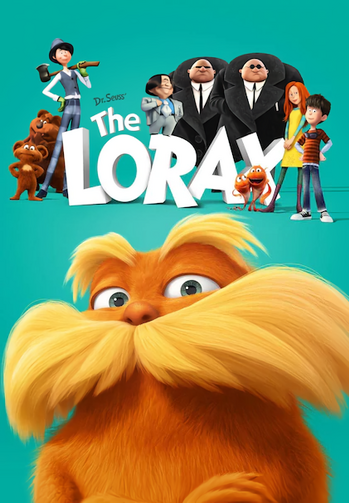 The Lorax is a computer-animated family feature film based on the book of the same name by Dr. Seuss. It is the third film by Illumination Entertainment and the second animated film from the team from Despicable Me, as well as the writers from Horton Hears a Who!. Danny DeVito voices the Lorax. New characters include Ted (Zac Efron), a 12-year-old boy living in the synthetic city of Thneedville who has a crush on a high school girl, Audrey (Taylor Swift), who says that Truffula Trees once populated this area before a city was built over it, and wishes to see them for herself. In an attempt to win over her affection, Ted seeks out the home of the Once-ler (Ed Helms), who tells the regretful tale of how he brought down the forest. But once he's discovered leaving town, Aloysius O'Hare (Rob Riggle) and his air company that oversees Thneedville wants to ensure that Ted stays in the city and nobody discovers the wasteland outside the limits.
Advertisement:

The film was released worldwide on March 2, 2012 (coincidentally on which would've been the 108th birthday of the original author).

The Lorax provides examples of:

In The Lorax, the movie's climax ends with a song where the entirety of Thneedville agree to let the truffela tree seed grow in the song "Let It Grow."

How bad can I be?

In The Lorax, the movie's climax ends with a song where the entirety of Thneedville agree to let the truffela tree seed grow in the song "Let It Grow."

How bad can I be?