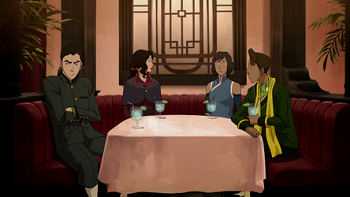 Nobody ever eats in tv shows, do they?

Korra returns to Republic City and Team Avatar faces their first mission together in three years when Prince Wu goes missing; Bolin and Varrick are on the run from the Empire, and meet up with some escaped citizens.