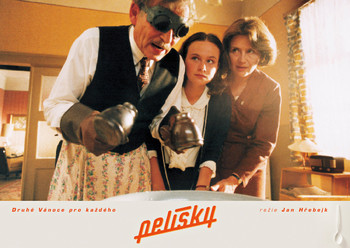 Cosy Dens (Czech: Pelíšky) is a Czech cult film from 1999. Directed by Jan Hřebejk, it is a tragicomic exploration of life under the Communist regime.

It follows the lives of two Prague families shortly before and through the Prague Spring of 1968, when there was hope that, after twenty years behind the Iron Curtain, the regime would become more liberal, or even that the country could become democratic again.

The Šebeks are headed by a father who is an officer in the Czechoslovak People’s Army; he believes in the ideology of the regime and tries to impose order and discipline in his family, causing conflict with his Western-minded teenage son Michal. The latter is vying for the attentions of his next-door neighbor Jindřiška, but she is more interested in the worldly Elien, a mature teenager whose parents live in America. Jindřiška’s father, the paterfamilias of the Kraus family, is a perpetually choleric World War II veteran whose contribution to his country’s freedom and his fight against Nazis was "rewarded" by years spent inside a Communist prison. He takes his bitterness out on his family and clashes with his daughter over petty issues. These squabbles play out over a rather boisterous 1967 Christmas holiday; the second act moves the plot to the spring of 1968, and focuses more on changes both within the families and in society.

The title is ironic in that the two families’ homes are not particularly cozy due to the differences among family members, yet resonant in that one’s home is where one can be oneself and get a measure of refuge from the oppressive government.

Czechs consistently rank Cosy Dens as one of their favorite movies and best comedies of all time. Its appeal lies to a great extent in its inclusion of many pithy quotes, as well as of elements based on a distinctly Czech experience; for this reason, it may not resound as much with foreigners, who may not get much of the humor, similarly to the critically acclaimed Kolya.

A prequel trilogy, Garden Centre (Zahradnictví), was released in 2017. Before that, in 2010, Občanský průkaz (Identity card), another book of Petr Šabach, was filmed and serves basically as Spiritual Successor to Cosy Dens. It takes part in The '70s and follows a group of teenage boys trying to follow their "hippie" dreams while under the much harsher regime of "Normalisation", brought to the country by the Soviet invasion.

Example of:
Paper Destruction of Anger