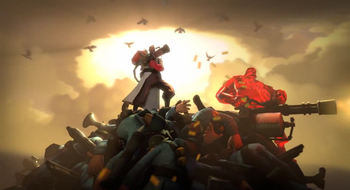 I AM BULLETPROOOOOOOOF!!!!!
Hey you, just because it's an Affectionate Parody of James Bond doesn't mean you can't be just as badass as 007 himself every once in a while!
Advertisement:

open/close all folders
Meet the Team Videos
Comics and Other Supplemental Material
Community-Created Content
Advertisement:
The Game Itself
Class Specific