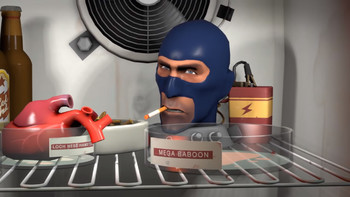 Team Fortress 2 is a war-themed hat simulator filled with over-the-top violence, parodies of 1960s national stereotypes, James Bond movies, and enough cosmetic items to make the Gravel Wars look more and more like a Mob War with incredibly well-dressed soldiers. The entire game (and its fanbase) doesn't take itself too seriously, and neither should you. Expect this page to get bigger and bigger as time goes on.