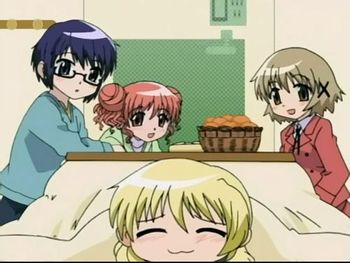 Shirou: This is why I didn't want to bring out the kotatsu.
Illya: Shirou, once you get inside, you wouldn't want to get out... It's like a magic spell's been cast on you...
— Today's Menu for Emiya Family

In Japan, most homes lack central heating, and are very thinly insulated, so most people rely on electric space heaters. The most common form is the kotatsu ("heater table") which consists of a low table with an electric heater built into its underside, with a very thick quilted drape around it. People wanting to stay warm seat themselves on the floor under the table. The drape keeps the heat trapped underneath, and it travels through the inside of clothing to heat the sitters' bodies. If they're so inclined, they can scoot almost all the way under the table and use it as a makeshift heated bed, although there is a belief that falling asleep under the kotatsu makes you vulnerable to catching a cold.

in the west) are a variety of mandarin orange that are in season during the winter. Oranges are considered to have a lot of nutrients important for getting through the cold season, so it is common to see a bowl of them on the table. For many Japanese, a kotatsu holding a bowl of tangerines is the archetypal symbol of winter.

Kotatsu usually show up in Slice of Life moments, with a (generally female) group of friends sitting around one, murmuring about how warm and comfortable it is, rambling on about their lives, napping, and every single one complaining that someone else should go get some snacks. Often prime Sleep Cute territory. They are also a useful vehicle for Naughty Under the Table hi-jinx.