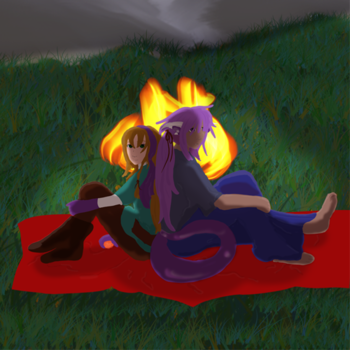 Poor Jiryu...People mistaking Teika for his consort when they hate each other and are forced to be around the other because of the plot.
Advertisement:

The Cloistered Sanctum is a story that takes place in an isolated portion of the world of Ullord. It follows Farval and Teika, two explorers who inadvertently stumble upon a village that is inhabited by people who fear persecution from the outside world. During the course of the story, the two explorers/cartographers bond with the inhabitants of the remote village, reflect on their lives and their decisions and work on finding their way home.

The Cloistered Sanctum is part of Anthologies of Ullord by Nikki Flynn and Edwin Dantes.