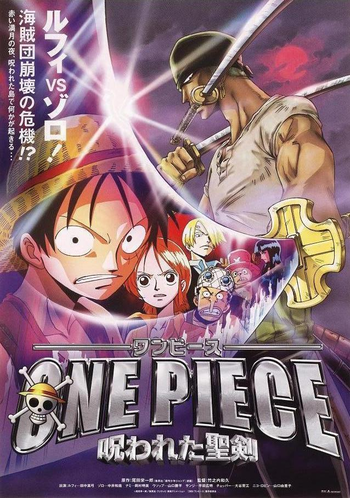 The fifth One Piece movie, mainly focused on Zoro.

On Asuka Island, the Straw Hat Pirates learn about the Seven Star Sword, considered the world's most beautiful sword and a valuable treasure, though it contains a deadly curse. When they come back to the ship, they find that Zoro, who was to act as guard, is missing, but they are forced to leave port when they are attacked by Marines. They dock in another section of the island and come across a village, whose job it is to keep the Seven Stars Sword sealed. It is soon attacked by Marines who are trying to free the sword—among whom is Zoro! What reason could Zoro have for doing this? What is the secret of the sword? Why would Marines want it? The answers lie on the night of the red moon.

The fifth One Piece movie opens with its most violent sequence pre-titles, followed by the much more upbeat start of the film popper.

The fifth One Piece movie opens with its most violent sequence pre-titles, followed by the much more upbeat start of the film popper.