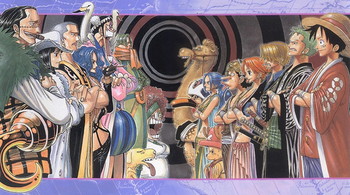 With Tony Tony Chopper now in the crew, the Straw Hats welcome their sixth member. But his introduction comes at a tense time as the crew reaches Vivi's home island, Alabasta, and race to reach the kingdom before Sir Crocodile, leader of the Baroque Works, puts his plan into motion to take over the island with the aid of a civil war he has engineered.

Advertisement:
Click to Read
Alabasta Arc has the following tropes