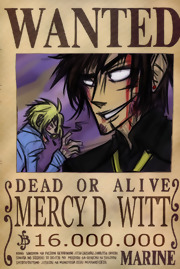 Witt’s bounty and Sanji laughing like a six year old.

is a One Piece Fan Fic written by nvzblgrrl

(and doesn’t that just roll off the tongue?).

Girl falls into One Piece. Girl joins the Straw Hat pirates. Girl goes on looking for treasure, friends and adventu-*sound of record scratching* Enter Mercy D. Witt, the genderbended first mate with a knack for sarcasm, drama and the occasional bouts of slight insanity. Major achievements include, but not limited to: Accomplished battle commentator, wannabe Lupin III, backstory producer, creator of Sogeking and accidental whale charmer.

At the scientific discovery of a portal making people capable of traversing the multiverse, Mercy Dewitt, general wallflower and student, makes the decision of leaving her grey and boring life behind, in exchange for the adventure of a lifetime in her favorite anime: One Piece.

Mind you, the whole ‘becoming a guy’ thing, was entirely unintentional.

Currently going through a rewrite.

Witt And Witticism may contains traces of peanuts and the following tropes: