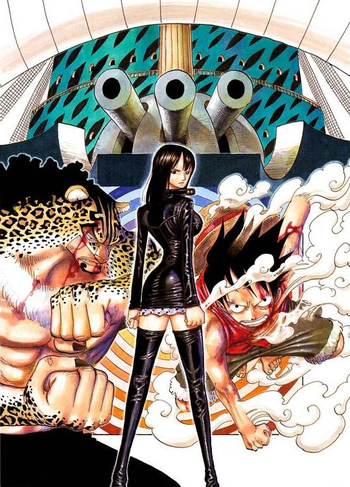 If there are more people stronger out there on the ocean... I need to get stronger... to protect my namaka... who I want to be with! If I don’t get stronger than everyone, I will lose them all.
— Monkey D. Luffy

Having found out Robin has been captured along with Franky and both are being taken to Enies Lobby (an impenetrable fortress of the World Government where criminals are convicted), the remaining Straw Hats head off to reclaim her before she's taken to Impel Down and lost forever. But to do so must make their way past a whole island of Marines and even then must contend with their strongest force, the secret police, CP9.

The Enies Lobby Arc has the following tropes:

As a sign of solidarity with Robin, the Straw Hat crew declares war on the entire planet.

Example of:
This Means War!

As a sign of solidarity with Robin, the Straw Hat crew declares war on the entire planet.