Series / Joe Pera Talks With You 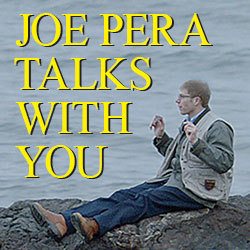 "It's not 'Sopranos,' but I did my best."
Man at bar: Excuse me, you have a TV show? What's it like?
Joe Pera: You know how most television shows feel like they were made by an energy drink? Well my show feels like it was made by apple cider.
— Season 3 promo

Joe Pera Talks With You is a series airing on [adult swim]. It stars soft-spoken comedian Joe Pera, who previously appeared on the network with his specials Joe Pera Talks You to Sleep and Joe Pera Helps You Find the Perfect Christmas Tree, set in the same universe. Joe is best described as a man in his thirties with the demeanor and behavior of someone much older. He's very quiet, humble, polite and gentle, and loves living in his small town of Marquette, Michigan, where he works as a middle school choir teacher. Each episode covers a different subject of interest to Joe, such as breakfast, iron, grocery shopping or lighthouses. the first season of nine episodes began on May 20, 2018, and the second season began December 6, 2019. a third special entitled Relaxing Old Footage with Joe Pera was released May 20, 2020, and third and final season began on November 7, 2021, before the series was officially canceled on July 7th, 2022.

Joe Pera Talks With You contains examples of: