Carnage is a Spider-Man villain and the first spawn of Venom. The symbiote has bonded to a number of hosts over the years, and like Venom has accumulated a number of alternate-universe counterparts. 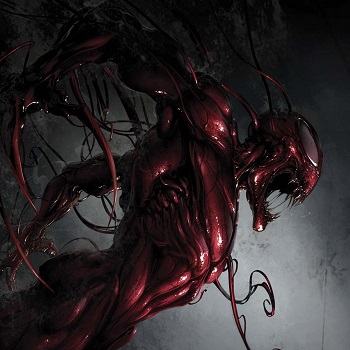 "I'm chaos, Mistuh Kurtz, chaos—and the rest of the world won't admit that its just like me. And because of that the world is worthless, its dirt on my heel—its a planet full of mannequins filled with blood and they may as well be torn up and burst and stamped on because what else are they good for—apart from making noise and being nice and making more stupid little mannequins that sit still for lies and TV and kissy-kissy garbage."

A psychopathic serial killer imprisoned for eleven consecutive life sentences, Cletus Kasady met Eddie Brock when the latter, separated from the Venom symbiote by the toxic touch of the supervillain Styx, became his cellmate. Learning of Brock's grudge against Spider-Man, Kasady tried to convert him to his nihilistic philosophy, mocking Eddie over his claims to have once been the supervillain Venom. Repeatedly rebuked, Kasady decided to murder his cellmate, but before he could the Venom symbiote entered the cell and rebonded to Eddie. Venom broke free, leaving the terrified and jealous Kasady behind. Sensing his desire for the power Eddie possessed, a scrap of the symbiote left behind dripped onto Cletus' hand and bonded with him, transforming him into the monstrous Carnage. As Carnage, Kasady proved stronger than Spider-Man and Venom combined, and his symbiote was not only less susceptible to sonics than its progenitor but infinitely more difficult to remove, having bonded to his bloodstream.

For more information on him, please refer to his page, and the adjoining symbiote page.
Advertisement: 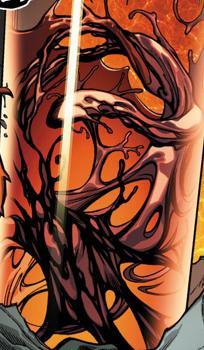 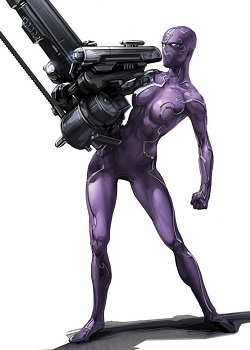 When the Carnage symbiote was taken back to Earth from its orbit after the prison break in the Raft, Michael Hall used the symbiote to create hybrid prostheses consisting of both technology and the symbiote itself. Eventually, the Carnage symbiote managed to escape its containment cell and bonded to Tanis Nieves, leaving its offspring within her prosthesis after it used her to rescue Cletus Kasady. Tanis initially refused to bond to this new symbiote, which was briefly later taken from her by Shriek, but eventually acquiesced to bond with it. 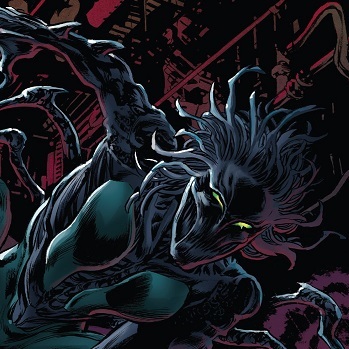 The Raze symbiote was spawned by Carnage as part of a ritual involving the Darkhold and bonded with former FBI special agent Claire Dixon, leaving her a puppet of Carnage's will. It was eventually taken from Claire by Jubulile van Scotter, who used it to augment her own symbiote to fight Chthon. 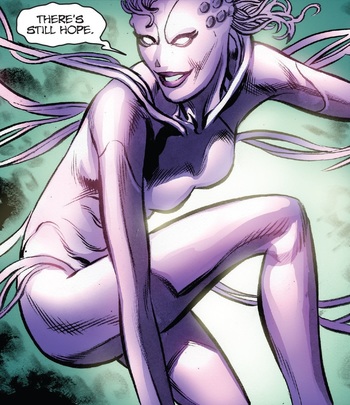 An offshoot of the Darkhold-augmented Carnage symbiote bonded with the South African teenager Jubulile van Scotter, this symbiote established a psychic link between her and Cletus Kasady that enabled her to help the Anti-Symbiote Task Force track him. When the eldritch god Chthon was summoned by Carnage, Jubilile absorbed the Toxin and Raze symbiotes to augment her own before banishing the dark god back to his interdimensional prison; though her symbiote seemingly perished in the process. 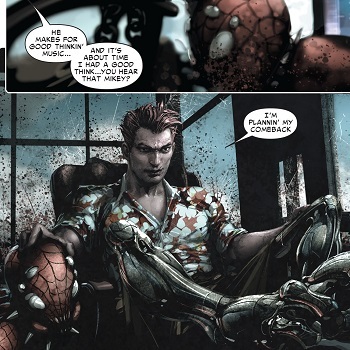 Doppelganger: Grrrr!
Carnage: That's my line—! I'm supposed to be the monster here!

Originally a "living geometric pattern" that resided in another dimension, Doppelgänger and several other members of his kind were turned into twisted duplicates of various superheroes by the Magus during the Infinity War. Unlike the other knock-offs, this one survived that event, and has periodically resurfaced to torment the real Spider-Man.

For more information on him, please refer to the Spider-Man Clones page.
Shriek 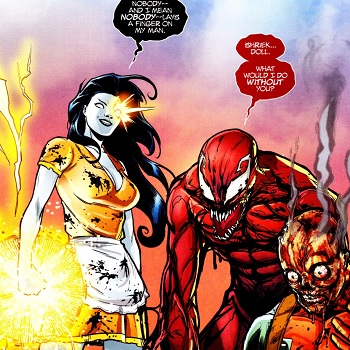 Cletus, via the Carnage Symbiote: She screams her pain as death and hatred. She kills for me. I like it. When it gets boring, I'll put her down like my mother's dog. I am Carnage. Killing someone I love will make me happy. So happy.

As a child, Frances Barrison was abused by her parents, especially her mother, whose cruelty drove her to drugs, overeating, and heavy metal. Frances' mental stability was further damaged when she was shot in the head during an altercation with the police, and when she had a run-in with heroes Cloak and Dagger, whose powers did something to her, giving her various superhuman abilities of her own. Now fully capable of taking revenge on the world she blames for her misery, Frances — calling herself Shriek — found soul mates of sorts in the form of her "husband" Carnage, and "son" Doppelganger.

For more information on her, please refer to the Spider-Man rogues gallery page.
Alice Gleason 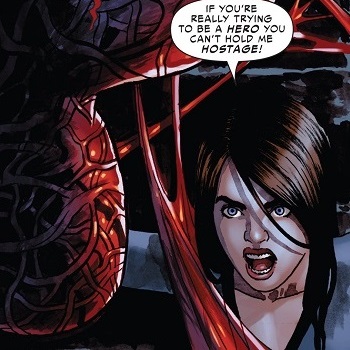 A beautiful but unscrupulously ambitious reporter who found herself in the crosshairs of the spectral Sin-Eater. Rescued by the inverted Carnage, she begrudgingly attempted to coach him on how to be a hero — while actually trying to get a promotion-winning scoop out of it. After Carnage defeated the Sin-Eater, Alice was disgusted that he'd developed feelings for her and revealed her deception before fleeing to the police. 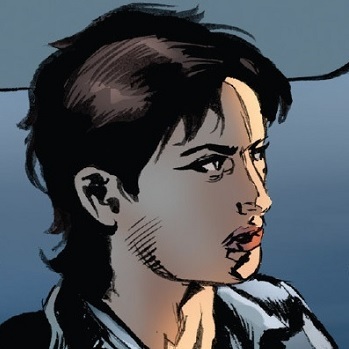 The sole survivor of Cletus' massacre at St. Estes Home for Boys, Manuela Calderon joined the military and was eventually hired as a security consultant at Grey Ridge Mine. When the FBI attempted to lure Carnage into a trap, Manuela was recruited into the Anti-Symbiote Task Force alongside John Jameson and Eddie Brock. Befriending Brock and developing a romantic affection for Victoria Montesi, Manuela helped stop Carnage from summoning the eldrich god Chthon. 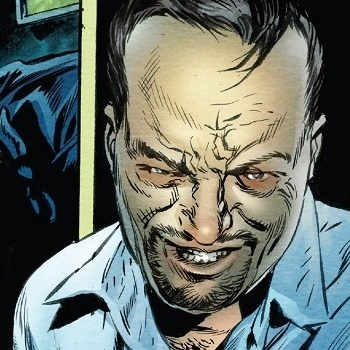 "Agent Dixon was a useful tool, but her usefulness—and yours—is drawing to a close. We—all of us—stand on the cusp of a new historical era. I'm grateful to you, agents. Your sacrifice, yours and your fellow agents', will make possible a new age. You've brought us the one who was foreseen in the prophecies of Aelfric the Mad Monk. At his hands the forgotten door will be reopened. Through him, he who sleeps shall wake, and all who live will tremble in the knowledge of his wrath." 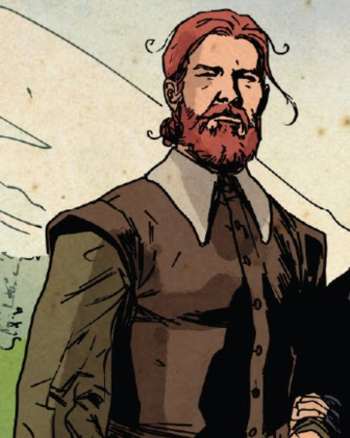 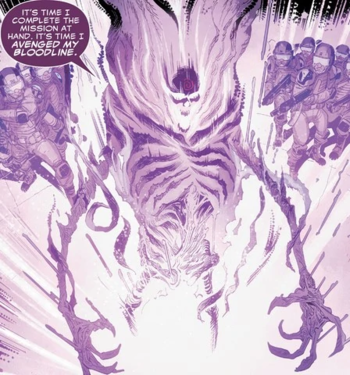 The ancestor of Cletus Kasady, Cortland was a 17th century English settler whose lover — Mary Ravencroft — was captured by a symbiote-worshipping cult. While attempting to rescue her,note She rescued herself. Cortland was captured and bonded to a symbiote, turning him into a bloodthirsty serial killer.

A serial killer who worships Carnage and desires to become the symbiote's new host. 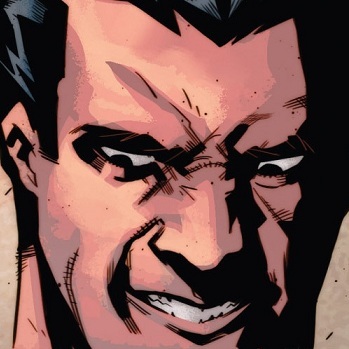 "You don't have to keep holding on. Carnage has no hold on you. You're your own man now. You can die a man's death. Doesn't that sound fine? After all... what good are you without the symbiote? Hmm? And the way you are right now... so weak... so pitiful... why would Carnage want you? Carnage wants a worthy host... not some bed-ridden has-been. I know it's coming... I know you can sense it. And when it gets here... it will find me waiting... and you—dead! Don't worry, Cletus. I'll take good care of Carnage."

A therapist working at Kramer Penitentiary, Dr. Jenner requested to work with spree killer Cletus Kasady, who had been separated from the Carnage symbiote by the Superior Spider-Man. Under his guidance, Cletus was admitted into the general populace and finally seemed ready to sever his psychological ties with the symbiote. However, Jenner secretly desired to become the symbiote's new host and hired an inmate to shank Cletus, smothering him when he learned the symbiote was on its way. When it reached the prison, Jenner offered himself to it, but it vehemently rejected him and resuscitated Cletus, who proceeded to kill Jenner along with the rest of the prisoners. 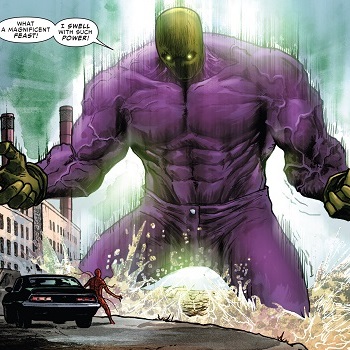 Sin-Eater: I can smell your sin. Like a mountain so massive that merely contemplating it requires madness.
Carnage: I tried confession, but that really didn't work.

A man who contacted Eddie Brock claiming to be the Sin-Eater serial killer, but was seemingly exposed as a compulsive confessor. In the wake of Carnage's morality (or lack thereof) being altered by the events of AXIS, he was found to have died, but returns as a sin-eating demon, and places the symbiote serial killer in his crosshairs after Cletus interferes with his mission to wipe out the press. After becoming Dark Carnage, Cletus used his new symbiote to reanimate Gregg and send him after Eddie Brock.

For more information on him, please refer to the Venom Rogues Gallery page.
Detective Jonathan Shayde

An NYPD detective obsessed with bringing the serial killer known as the Artist to justice.