These are characters who, while they may or may not host a symbiote, play prominent supporting roles in Venom's series.

A family largely based out of San Francisco, all of whom are related to Eddie Brock. 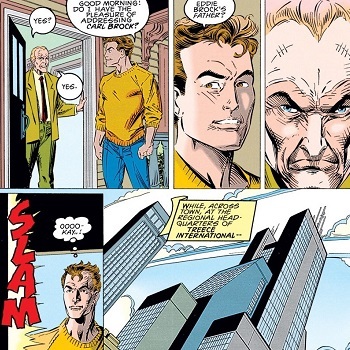 "What ever relationship between Edward Brock and myself is no longer applicable."

Carl is Eddie Brock's father. He was a man who lacked emotion, that was until he met Jamie and fell in love with her. He experienced happiness for the first time in his life and soon, the two were married. What she wanted most of all was to have a family with the man she loved. But unfortunately she died of complications from giving birth to their first and only son, Eddie Brock. 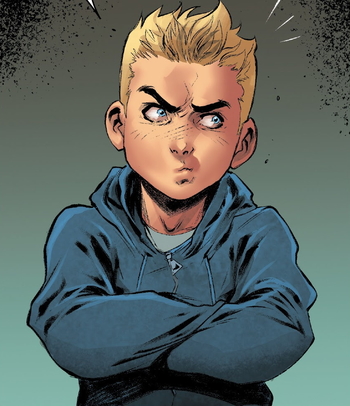 Eddie's purported half-brother, later revealed to be his son. Eddie meets him while fleeing from The Maker's goons and is dragged away before they can be properly acquainted. Later on, Dylan manages to catch up to Eddie and decides that he'd rather be with Venom than their abusive father.

Flash's family, who he largely does not talk to due to his troubled relationship with his father.
Harrison Thompson 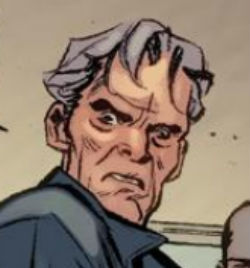 Flash's abusive, alcoholic father. He was a cop for the NYPD but is now retired, and Flash does not look fondly on his parenting, which instilled in him a need to impress his father. Flash also somewhat blames him for his bullying in his past. 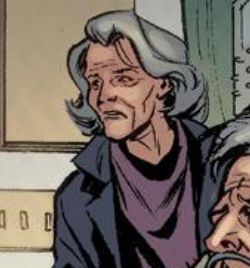 Rose Thompson is the loving mother of Jessie Thompson and Flash Thompson and wife of Harrison Thompson. Although she cared for the children very much, she could not stop her husband's drinking and his violont outbursts after that, mostly towards their own children. Although Rose tried to keep the peace between the family, they mostly drifted apart after both Jessie and Flash had become adults.

During Flash's tenure as an Agent of the Cosmos, he found himself with an unlikely band of misfits.
803 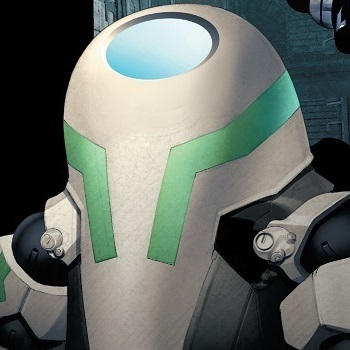 A servant and maintenance robot, 803 was the slave of a space pirate named Kio, who forced the hapless droid to do his malicious bidding. Centuries of mistreatment caused 803 to become suicidal, so he was quick to offer aid to Agent Venom when the Agent of the Cosmos infiltrated Kio's spaceship, convinced that Flash would destroy him afterward as a "reward" for his services. After killing Kio and his crew, and saving their captives, Flash instead took 803 on as a travelling companion, to the melancholic robot's immense disappointment. 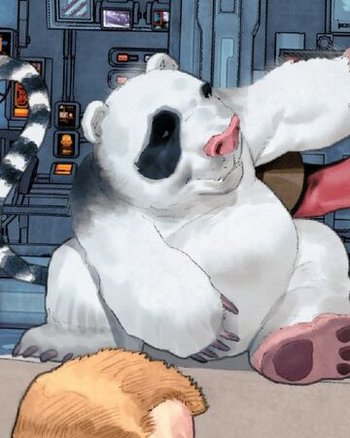 Hilla Rollo is the daughter of the criminal Pik Rollo. She was kidnapped by Mercurio and his space pirates to force Pik into doing his bidding. Pik allied herself with one of Mercurio's enemies, Venom, and they eventually managed to rescue Hilla. Hilla joined her mother as she accompanied Venom in his ensuing adventures. 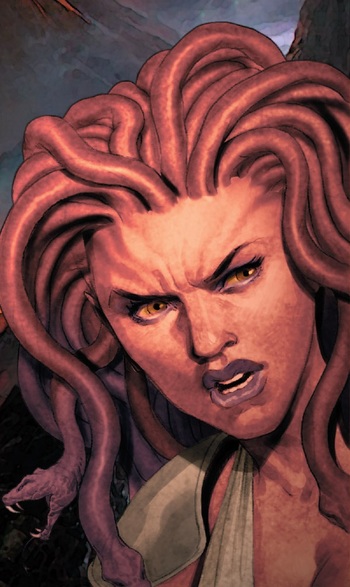 "I must make a name for myself in order to rule my people. Also, you seem unstable and I find that attractive."

Iqa was the warrior queen of the Wugin, living peacefully on their volcanic planet until the alien terrorist Mercurio planted a piece of technology in a volcano that caused it to erupt, pitting the Wugin in a war against the Underdwellers. 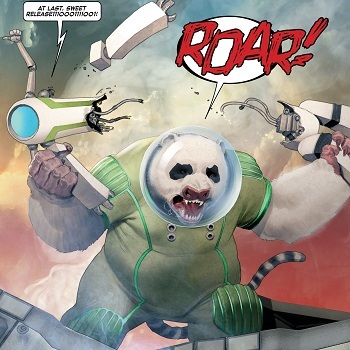 "I am not a pan-duh. I am a Ruu'lto. And I am not experiencing any sadness at the moment. I feel only rage."

Pik Rollo is a warrior of the alien species known as the Ruu'lto. Her planet was raided by Mercurio and his pirates, where she was kidnapped alongside its other greatest fighters, forcing them into a life of crime. Additionally, the Gramosians took Pik Rollo's daughter, Hilla, captive. 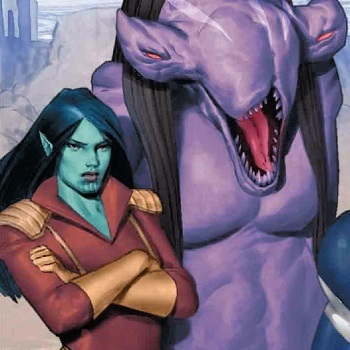 A hot-tempered Skrull Agent of the Cosmos bonded to a purple symbiote. She and her mentor, Myntril, followed Venom for some time before abducting his ship. Tarna immediately picked a fight with Agent Venom, having deemed him unworthy of being an Agent of the Cosmos, but was stopped by Tarna. After witnessing Flash's friendship with the symbiote, she was moved by the lengths he was willing to go to protect it, and ultimately defected to the Space Knights. She eventually rejoined the Skrull Empire, and in the wake of the war with the Cotati she was sent with a small squad — including fellow former symbiote host M'lanz — to investigate a series of attacks on Kree and Skrull colonies at the edge of the galaxy, unaware that it was the work of Knull, the King In Black and god of the symbiotes.

Over the years, the Venom symbiote and its hosts have found themselves embroiled in the affairs of Earth's various governments, from the Project Rebirth program to SHIELD.
General Brad Dodge 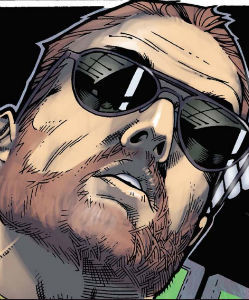 "You ever let that alpha-jock brute anger sully my "Operation Venom" again, I will cut you off the team faster than a mohel."

A United States General and the head of Project Rebirth 2.0, Dodge is the person who selected Flash to become Agent Venom. Because of his own disability — he was blinded at some point in his life — he has a soft spot for Flash, but is also willing to prioritise the mission above all else. 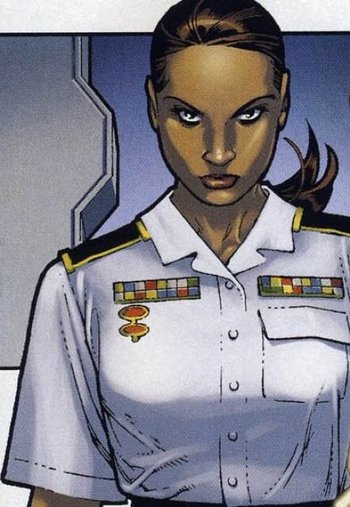 "I'm not babysitting you, Thompson. I'm monitoring the alien. That's my job. The first sign it's in control, I push this kill-switch, fry it, and leave you hanging in the wind. Literally without a leg to stand on. So when I say jump, you don't say "how high?"... you shut the hell up and jump!"

Captain Katherine Glover works for the United States Special Forces, she is in charge of Flash Thompson's Venom missions overseas. Kat is shown to be a strong and courageous woman, whom can take care of herself. Flash's partner during his time as Agent Venom, Kate, like Dodge, is in charge of keeping him in-check and on-mission. Unlike Dodge, she also assists Flash in the field. 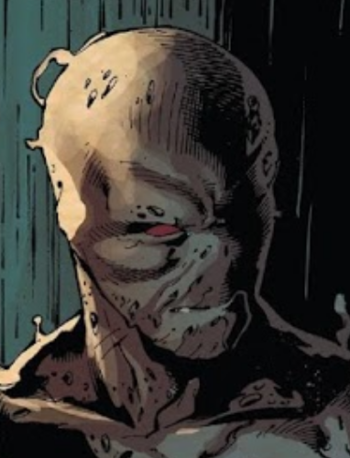 A former Agent of S.H.I.E.L.D. and one-time symbiote supersoldier during the Vietnam War, Rex Strickland begrudgingly recruits Eddie Brock to rescue his old comrades from a S.H.I.E.L.D. black-box facility in exchange for information regarding the symbiotes... until it's revealed that "Rex" is a symbiote himself — an offshoot of the ancient Grendel symbiote-dragon that had bonded to the real Rex Strickland and impersonated him for decades after he was killed in the war. 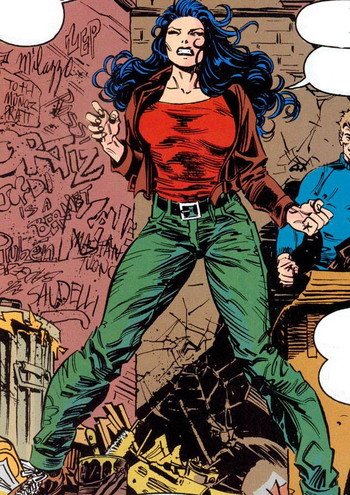 "He has a reputation for extreme violence. But he seems so... earnest. Sigh, why is it the bigger their problems the more I want to save them?"

A young lawyer fighting for the oppressed people of San Francisco, Beck Underwood befriended Eddie Brock and had a short-lived romantic relationship with him during his time as the Lethal Protector of the Underground City. 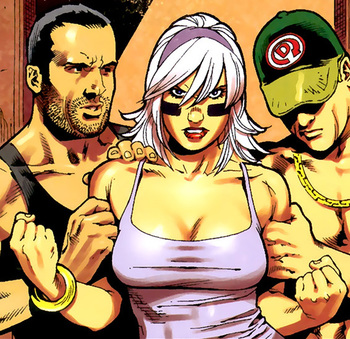 A teenaged heroin addict Eddie Brock befriended as Anti-Venom. Supposedly cured of her addiction, she helped him infiltrate and take down drug cartels, but was secretly getting high. She was captured by the Quintas cartel when the Punisher interrupted Eddie's shakedown, leading to them setting aside their differences to rescue her. She hasn't been seen since.

"Listen... not that I'm anything less than fabulous... but why would you need my help? I write about bat-babies and Jesus figures appearing in oatmeal. And you look like you have connections."

A reporter working for the Daily Inquisitor, who serves as Agent Venom's eyes and ears in the criminal underworld of Philadelphia. 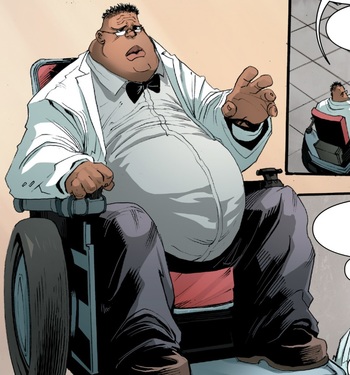 An Alchemax astro-biologist whom Liz Allan assigns to help Eddie Brock keep his symbiote under control. 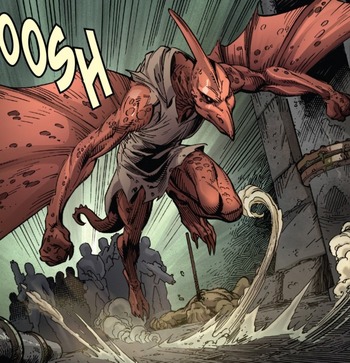 A Spanish animal biologist who was used as a test subject for Stegron's dinosaur serum, being transformed into a humanoid pterosaur. She was freed from Stegron's control by Venom, and was later attacked by Kraven the Hunter.

An investigative journalist based out of Sacramento, California, and an old friend of Eddie Brock's. 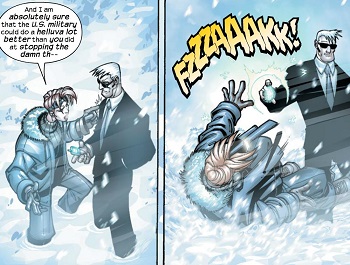 Untold millennia ago, an alien entity informed a race of mechanical, self-replicating spider-like beings that humans were a violent and chaotic species that needed to be destroyed, lest they eventually spread throughout the cosmos. As they prepared to wipe out humanity, the spiders were delayed by horrific weather conditions, and during that time they realized that they had been duped, and that their benefactor had merely wanted the humans gone so that it could claim the Earth as its own. Most of the spiders left Earth, but a small cluster, still believing in their mission, stayed behind. Weakened, this group started slowly gathering physical and political power so that it could one day commit the genocide it was hired to.

In the present day, Reed Richards discovered a swarm of the spiders during a space expedition. The spiders eventually created a humanoid form dubbed "The Suit". Making contact with Nick Fury, the Suit explained that the Venom symbiote, which he was briefly exposed to while it and Eddie Brock were in the custody of the Fantastic Four, was going to be used in a plot to cause chaos on a global scale. Learning that a clone of the Venom symbiote, made by the genocidal spiders to further their goals, was in the Arctic, the Suit headed there to eliminate it. 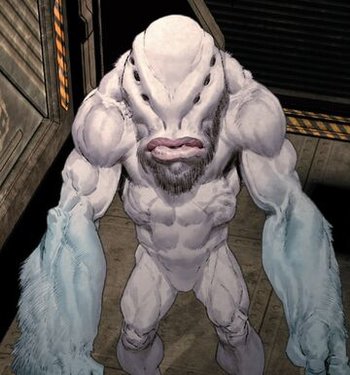 Myntril is a high-ranking member of the Agents of the Cosmos, and a champion of the universe dedicated to protecting those in need. He assigns Tarna to work with Venom, but once Venom's symbiote relapses into its corrupted state he puts it on trial for its life. 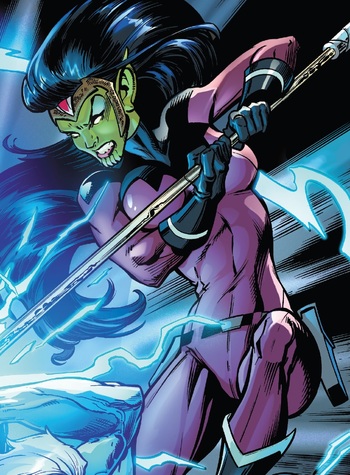 For more on her, see Marvel Comics: Skrulls