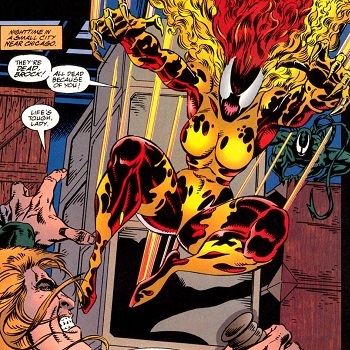 One of five symbiotes forcibly spawned from the Venom symbiote, Scream is yellow and red, and focuses on Prehensile Hair -like tendrils as its weapons.

Scream's first host was Donna Diego, a security guard selected by the Life Foundation to serve as a superpowered bodyguard. The de-facto leader of the group, Donna, alongside Agony, Lasher, Phage, and Riot, attacked Eddie Brock, but were defeated and seemingly killed by Venom and Spider-Man. Donna and the other Life Foundation mercenaries returned, having somehow survived, and begged Eddie for training to control their symbiotes. Venom refused, believing them to be lost causes like Carnage, and his prediction eventually came true: Donna had been diagnosed with schizophrenia, which was made worse by her symbiote's bloodlust, and ultimately suffered a psychotic breakdown, killing the other symbiotes' hosts before going into hiding. When the Xenophage attacked, Donna resurfaced, having regained her sanity and control over her symbiote, and helped Venom defeat it. Afterward, she discovered the creature's ship, the tracker of which brought her an alternate dimension where Venom and Wolverine were in the middle of battling supervillains Chimera and Dirtnap. Scream aided the two in defeating the villains, freeing those Dirtnap had previously absorbed in the process, and she and Venom left on amicable enough terms. Some time later, however, Eddie, on a crusade against the symbiotes, lured her into a trap that disabled her symbiote, allowing him to stab her in the head with a heated dagger, killing both her and her symbiote.

Years later, the Scream symbiote was resurrected by Knull and — still bonded to Donna's skeleton and having imprinted her consciousness into itself — began rampaging. Separated from Donna's corpse by Patricia Robertson, it bonded to her and succumbed to Knull's control, attacking Andi Benton. After Patricia sacrificed herself in order to protect Andi from Carnage, the Scream symbiote bonded to her. While Andi initially resented being bonded to the symbiote, they eventually developed a sense of camaraderie and came to accept one another as found family. 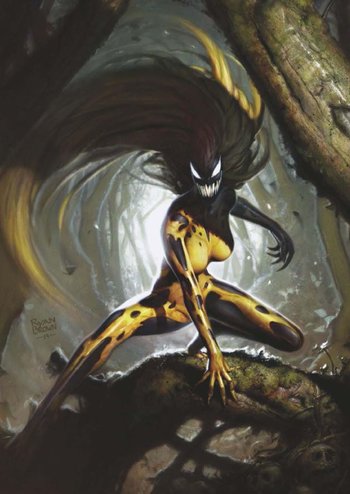 "I can hear it! I've always been able to hear mine. Even before I was united with it. The voices! The voices told me they were coming. Told me to be quiet about them. Told me what I had to do!"

A mercenary hired as private security by the Life Foundation, Donna Diego was bonded to the Scream symbiote — one of five offspring forcibly extracted from the Venom symbiote. After the Life Foundation's plots were foiled, Donna and the others — Lasher, Riot, Agony, and Phage — attempted to solicit Eddie Brock's help in learning to use their symbiotes for good. Succumbing to her schizophrenia, Donna had a psychotic breakdown and murdered the other Life Foundation symbiotes' hosts. Some time later, she returned in the wake of the Symbiote Invasion having dedicated herself to helping the symbiotes that wanted to peacefully coexist with their hosts, and teamed up with Venom to kill a Xenophage that had come to hunt them.

Donna was ultimately murdered by Eddie Brock in much the same way she'd killed her one-time comrades, and her body was dumped in an unmarked grave. Years later, the Scream symbiote was resurrected by Dark Carnage using the power of Knull, and puppeteered Donna's corpse until it bonded to Patricia Robertson. 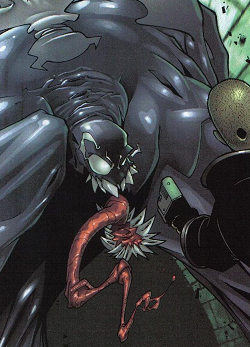 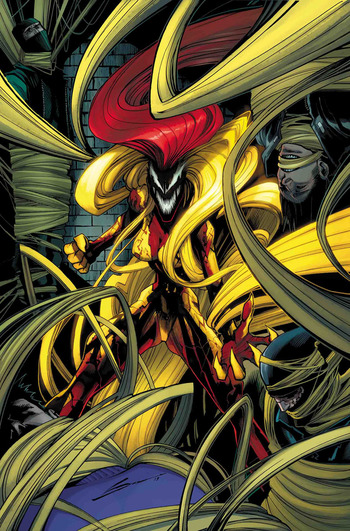 Patricia Robinson was a communications specialist for the US Army, stationed in Antarctica. When a clone of the Venom symbiote was unleashed, it killed all of the personnel at her base, but Patricia fended it off, leaving her the sole survivor of the incident. She escaped with the aid of a nanorobotic alien known as the Suit, who, after implanting her with cybernetic augmentations, tricked the symbiote into bonding with her, the cybernetic implants allowing her to control it. Patricia was tricked into travelling to New York, many assuming her to be Venom, where her cybernetics malfunctioned and she lost control of the symbiote and fought Spider-Man and the real Venom before her cloned symbiote re-merged with the original Venom symbiote.

Years later, Patricia resurfaced, having trained to hunt down symbiotes using a small arsenal of anti-symbiote weaponry. Coming across the resurrected Scream symbiote, Patricia was taken over by it, and was sent to hunt Andi Benton before wrestling control back from the symbiote. Calling herself Scream, she attempted to save innocents while Carnage and his symbiote forces attempted to resurrect the symbiote god, Knull. 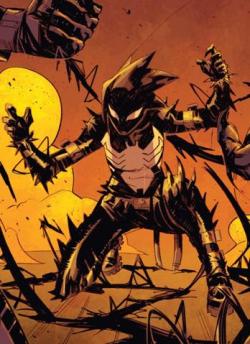 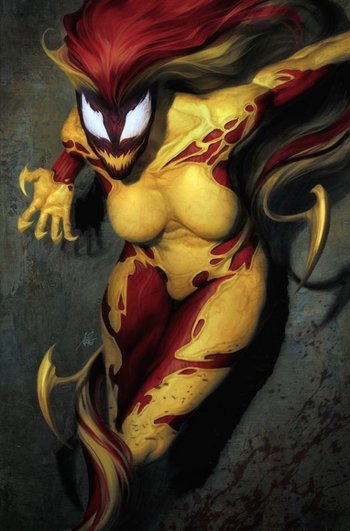 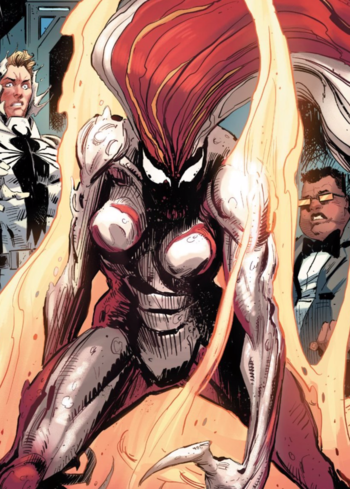 "Venom? Puh-leeze! Let'cha in on a lil' secret, asswipes. I'm nastier. Angrier. And way scarier than Venom. He's a big softie. I'm Mania. I'm the vicious cat, and I came to scratch out some eyes."

A teenage girl who lived in the apartment above Flash's and goes to the high school where is an assistant gym coach, Andi noticed something was unusual about her teacher and learned that he was Agent Venom. Shortly afterwards, her family was attacked by Jack O'Lantern in an attempt to get to Flash, her father dying in this attack. When Flash extended the Venom symbiote in an attempt to protect Andi, the cloned portion it had previously reabsorbed separated and bonded to her, and she would go onto dub herself Mania.

She also later learned that the portion of the symbiote she possessed contained the hell mark bestowed upon Venom by Mephisto and possibly the demon Daimon Hellstrom had possessed him with. She later lost her symbiote, but would retain her hell mark and its demonic powers and continued to fight crime in Philadelphia.

After being hunted by Carnage during his quest to resurrect Knull, Andi ran into Patricia Robertson while she was bonded to the Scream symbiote. The two worked to protect innocents before Patricia was killed by Cletus Kasady, her symbiote bonding to Andi and turning her into the third Scream. Alone and stranded in New York, Andi struggled with depression and PTSD before being dragged into a new conflict with another primordial symbiote, Grendel's Mother, which sought to claim the Scream symbiote as her surrogate daughter.

When Cletus Kasady returned from death, he put out a call to the Life Foundation symbiotes and others stranded on Earth to give in to their darker impulses and unite with him in Washington, DC. Scream tried to fight off her "brother's" influence, but eventually gave in, forcing Andi to use her Hellmark on her own symbiote before being captured. The remnants of Scream were given to Dr. Steven, who, in a bid to save it, infused Scream with a sample of Flash Thompson's Anti-Venom symbiote. This created a new symbiote that then bonded to Andi, which introduced itself to her with a name meant to signal the absence of Scream — Silence.